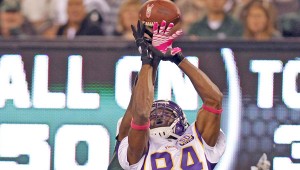 Former Marshall and NFL record-setting wide receiver Randy Moss (84) announced on Monday that he is retiring from the NFL. (The Ironton Tribune / MCT DIRECT Photos)

MANKATO, Minn. — Randy Moss dominated when he wanted to dominate.

Moss spent 13 seasons doing things on his own terms, which is why perhaps the loudest career the NFL has ever seen — both in terms of the roars he induced on the field and the aggravation he caused off it — ended so quietly on Monday.

No farewell speech from maybe the most physically gifted receiver to don a helmet. No tearful goodbye from a record-setting performer who changed the way defense is played in the NFL. Just a one-sentence statement from his agent saying one of the most colorful careers in league history was over.

“Randy has weighed his options and considered the offers and has decided to retire,” Joel Segal said on Monday.

It was vintage Moss, a revolutionary talent who was never very much interested in doing things the conventional way.

Fans were awed by his once-in-a-generation blend of size, speed and intelligence. Teammates were charmed by the charisma he showed behind closed doors and coaches were often infuriated by his boorish antics and lack of respect for authority.

“I don’t know if anybody can totally pin down who Randy Moss is,” said Tim DiPiero, one of Moss’ first agents said last year.

If this indeed is the end for Moss, he leaves the game with some of the gaudiest statistics posted by a receiver. His 153 touchdowns are tied with Terrell Owens for second on the career list, and he’s also fifth in yards (14,858) and tied with Hines Ward for eighth in receptions (954).

“In a lot of ways, he was the Michael Jordan of offenses in our league,” Vikings coach Leslie Frazier said. “He was a special player for a long, long time.”

Those numbers, and his status as perhaps the best deep threat in NFL history, will make him a strong candidate for the Hall of Fame. But voters will also be weighing those achievements and his six Pro Bowl seasons against a history of mailing in performances and a reputation as a coach killer.

As Moss himself famously said: “I play when I want to play.”

Trouble off the field in high school prevented Moss from attending Notre Dame or Florida State, so he landed at Marshall and scored 54 touchdowns in two electrifying seasons with the Thundering Herd.

The character questions hurt Moss in the 1998 draft. He fell to the Vikings at pick No. 21 and he spent the next seven years making every GM in the league who passed on him regret it. He scored 17 touchdowns to help the Vikings reach the NFC title game, a season so overpowering that the rival Packers used their first three picks in the following April’s draft on cornerbacks to try to slow him down.

Didn’t do much good. Moss scored at least 10 touchdowns in all but one season in his first tour with the Vikings.

“The things I’ve seen him do, I don’t think I’ll ever see another player do the things he did,” Vikings tight end Jim Kleinsasser said. “Great career. Tough to see him not playing because I think he had a lot left out there that he could have done for somebody.”

Sensing a change of scenery was needed, the Vikings traded Moss to Oakland in 2005, where he spent two quiet seasons before his career was revived in New England. He re-emerged as a force with the Patriots, hauling in a single-season record 23 TD passes from Tom Brady to help the Patriots reach the Super Bowl.

Vikings fans were euphoric at the news of his return last season, but things soured in a hurry. He caught 13 passes for 174 yards and two touchdowns in four games back in purple, clashed with coach Brad Childress in the locker room and brought embarrassment to the organization when he berated a caterer at team headquarters.

He hugged former Patriots teammates after a Vikings loss, and then bizarrely stepped to a podium to fawn over the Patriots, criticize the Vikings for ignoring his strategic advice, and announce his plan to interview himself the rest of the season instead of letting reporters do it.

An enraged Childress unilaterally decided to cut Moss shortly after, a decision that helped seal his fate with Vikings ownership.

Moss finished the season with eight games in Tennessee, but only caught six passes. Segal said earlier this summer that the receiver was training hard and determined to prove to the doubters that he could still dominate the game like he had in the past.

The Jets were believed to have some interest in Moss, but Segal declined to elaborate on the options that were available.

“Randy has been a great player for a long time,” said Bob Pruett, Moss’ college coach at Marshall. “He’s choosing this on his own terms and I think that’s good. If that’s what he wants to do, that’s what he should do.”

While many grapple with what Moss’ legacy will be, there is no denying the impact he had on the game. The Cover 2 defense has become a fashionable scheme over the past 10 years, and it was designed in large part to prevent Moss from burning opposing defensive backs for long TDs.

“He’s a guy who changed defenses,” Vikings cornerback Antoine Winfield said. “You had to put two defenders on him to take him out of the game so it opened up the rest of the offense. Great guy, great teammate, I have a lot of respect for him, he’s brought a lot to this game and I wish him well.”

Whether the 34-year-old Moss is truly done is anyone’s guess. That, of course, appears to be completely up to him.

“He’s one of the best receivers of all time to play this game,” Vikings receiver Percy Harvin said. “I’m sure he hung it up with no regrets, so I wish the best for him. He had a great career and did a lot of great things.”

The Associated Press HOUSTON — A couple of weeks ago Jose Altuve, Jimmy Paredes and J.D. Martinez were playing for... read more