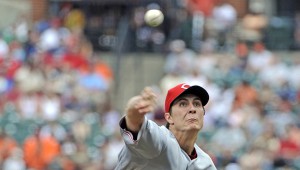 HOUSTON — Homer Bailey’s ornate orange cowboy boots sat in his locker below a pair of well-worn Wrangler jeans, and the Texas native smiled as reporters approached on Tuesday night.

“Home sweet home,” he said before anyone could ask a question.

After being knocked around in his previous start, Bailey pitched eight solid innings to lead the Cincinnati Reds to a 5-1 win over the Houston Astros at Minute Maid Park, about 100 miles from his hometown of La Grange.

Cincinnati scored five times in the fifth, highlighted by Edgar Renteria’s ninth career grand slam, and has won four of five since it was swept in a four-game series against the New York Mets.

Chris Heisey and Ramon Hernandez sparked Cincinnati’s big inning with consecutive doubles, making it 1-0. Wandy Rodriguez (7-8) walked Bailey and Drew Stubbs with one out to set up Renteria’s second homer of the season, which landed in the Crawford Boxes in left field.

Bailey (6-5) allowed one run and five hits to bounce back from his rough outing in that series against New York, when he surrendered a career-high nine earned runs and 12 hits in four-plus innings.

“I was hoping that him pitching in front of the home folks here and getting some of momma’s home cooking was going to help him,” Cincinnati manager Dusty Baker said.

Bailey also tossed seven scoreless innings against the Astros in his first career appearance at Minute Maid in May.

“Two of the times he’s thrown really well have been here, and I know he’s from Texas,” Houston manager Brad Mills said. “So that might have something to do with it; I don’t know.”

Bailey said he left more than 30 tickets for friends and relatives, but he was most excited to pitch in front of his grandmother.

“(She) is 80-something years old and it’s kind of hard for her to travel … so knowing that she got to see me pitch in the major leagues meant a lot to me,” he said. “Now she saw that back to back times I’ve gotten to throw well, it can just add to her scrapbook of articles she gets to keep.”

Aroldis Chapman relieved Bailey and pitched a perfect ninth to extend his streak of hitless innings to 9 2-3.

The new-look Astros had trouble stringing hits together Tuesday after winning the first game of the series 4-3 in 10 innings.

Jimmy Paredes reached on a leadoff walk in the fifth inning before a single by Carlos Corporan sent him to third. Paredes scored on a single by Luis Durango that bounced off third base and went into left field to trim Cincinnati’s lead to 5-1.

Bailey limited the damage by getting Jose Altuve to ground into an inning-ending double play.

Bailey didn’t allow another hit until Altuve singled with one out in the eighth, but he retired the next two Astros.

Rodriguez gave up four hits and walked three in five innings. He also struck out three to become Houston’s franchise leader for strikeouts by a lefty with 947, passing Bob Knepper’s 946.

“That one inning did him in,” Mills said. “The first four innings he gave up one hit and was throwing the ball extremely well. That fifth inning, the big at-bat was the one to the pitcher, ended up walking him on nine pitches.”

Bailey said pitching coach Bryan Price was the key to his success at the plate.

“I have to credit the pitching that I get from Bryan Price in the tunnel,” he said. “That’s where all that credit goes. He usually tries to throw me back foot sliders and back foot curveballs like Wandy was so I have a little bit of experience with it.”

Rodriguez had some soreness in his back, but said that wasn’t the reason for his struggles.

“That’s not an excuse. I threw my first four innings,” he said. “I felt sore earlier in the bullpen, but that’s no excuse. I felt sore all game, but I could throw the ball.”

NOTES: Baker said 3B Scott Rolen, sidelined by an inflamed left shoulder, will not be ready to come off the disabled list when he is eligible on Friday. He said he would know more about when he might be activated on Wednesday. … Houston OF Jordan Schafer, on the DL with an injured left middle finger, should begin swinging by the end of the week. Schafer was acquired from Atlanta in the Michael Bourn trade. … LHP Dontrelle Willis starts for the Reds in Wednesday night’s series finale against Houston rookie Jordan Lyles. Both pitchers are winless this season, with Lyles 0-6 in 11 starts and Willis 0-1 in four starts. … The 20-year-old Lyles is the youngest player in the National League and the second youngest in the majors behind the Angels’ Mike Trout.

The Associated Press GEORGETOWN, Ky. — Jordan Palmer walks to midfield and plays catch for a few minutes while the... read more