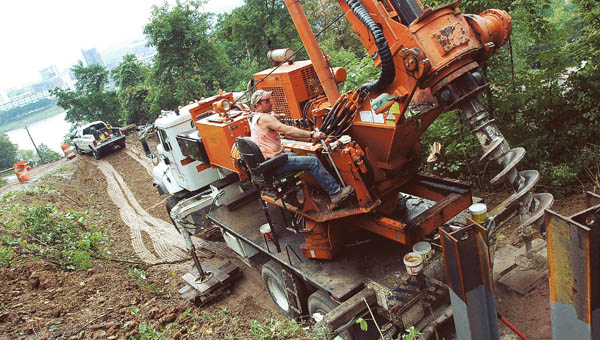 Ron Hart, with BBR Drilling of Belmont, uses a large drill to build a wall for the new road located in North Huntington Heights in Chesapeake.

“They have about half of it in,” Mayor Dick Gilpin said.

In March the village council awarded the contract to BBR Drilling Co. after it submitted the lowest bid at $296,350. The entire project, including engineering costs, inspection fees and contingency, is expected to cost $405,000. Most of that will come from a grant from the Ohio Public Works Commission.

To get state funding, the village had to come up with 10 percent of the project costs in matching funds.

The Lawrence County Commissioners agreed to borrow $40,000 from US Bank for 10 years at an interest rate of 4.79 percent. Half of that is to be paid back to the county by Chesapeake.

For the past two years, the village has sought funding to rebuild the roadway that leads to a residential area of about 120 houses. Excessive rainfalls caused numerous slides that have all but eliminated the road.

Contractors have already put in 32 of 58 25-foot-long H beams. Between the beams concrete lagging will be placed.

“They are digging it down to the bedrock in order to put the concrete in,” Gilpin sad. “They are to the point if we have to open the road up during the day we can do that while they are working off the road.”

However, typically the roadway is closed to traffic from 7 a.m. to 7 p.m.

A nine-man, three-woman jury was seated Wednesday afternoon in the trial of Megan Goff. Goff, formerly of Hamilton Township, is... read more