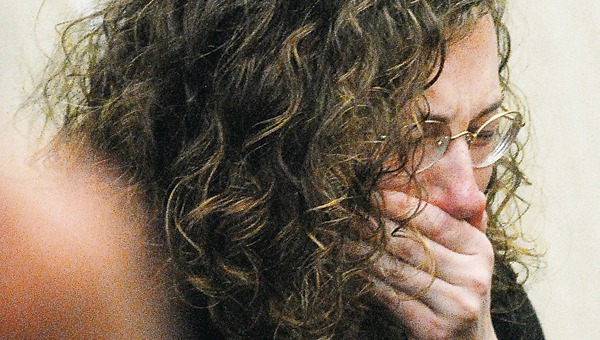 Did she plan to shoot her estranged husband with “prior calculation and design” or was she a battered woman left with no options but to kill or be killed?

That is what a four-woman, eight-man Lawrence County Common Pleas Court jury will decide in the case of Megan Goff.

Goff, 31, formerly of Hamilton Township, is charged with aggravated murder in the trial of Bill Goff. The incident took place in 2006. Goff was convicted the following year but in 2010 the Ohio Supreme Court overturned her conviction and ordered a new trial.

Goff is accused of shooting her estranged husband at his residence in March 2006. She said she shot him because of years of abuse and his threats to kill her and the children.

In his opening statement Thursday morning, Assistant Lawrence County Prosecutor Brigham Anderson described how Megan Goff took two guns from her mother’s Kentucky home and then drove to the home she once shared with the victim.

After readying a 9 mm Glock and a .40 caliber Carr pistol, she went to the door and once opened, went inside and “before he can take his hand off the door knob, begins firing,” Anderson said. “Her statement is, she fires the guns until they won’t fire anymore. Fifteen shots to the head and chest.”

Anderson said while Megan Goff told authorities after the shooting that Bill Goff had found out where she was hiding from him and had called and threatened her, Megan Goff never told police about the threats even though she had a restraining order against him.

But defense co-counsel William Bluth said in his opening statement that, “There’s a lot more to this story than what Mr. Anderson suggested.” Bluth said Goff was abused throughout her life, first by a neighbor who repeatedly raped her and threatened her if she told anyone, and then later by her husband, who began pursuing her when she and her family moved next door to him.

Bluth told the jury that during their seven-year marriage, Bill Goff isolated his wife, humiliated and threatened her. The turning point was when he began to threaten the couple’s two children.

Bluth said she went to her estranged husband’s house the night of the shooting because she wanted to talk him out of hurting the kids.

“Megan Goff shot Bill Goff because she had an honest and reasonable belief of imminent danger for herself and the children,” Bluth said.

After opening statements, Anderson played a videotape Megan Goff made the day of an alleged domestic violence incident at the Goff home two months before the shooting.

On the tape, a seemingly sleepy and medicated Bill Goff is sitting on the sofa discussing the medical condition he suffered from. His children play on the sofa and elsewhere in the room as the adults talk.

At one point, Bill Goff is seen trying to go back to sleep as his wife continues to focus the camera on him. The tape continues with Bill Goff trying to wrestle the video camera away from Megan Goff.

The children are heard crying at this point and the daughter is heard saying she doesn’t want “Daddy to be mean to you again.” She does not specify what she means.

The tape fades to black and then resumes a few hours later on the same day with Megan Goff conducting an apparent inventory of her household belongings, such as the contents of a chest of drawers and kitchen cabinets.

Anderson also played the 911 audiotape of the telephone call Megan Goff placed to the Lawrence County Sheriff’s Office after she shot Bill Goff on March 18, 2006.

She is heard screaming and crying. On the tape, former dispatcher Ruthanne Delong attempts to calm Megan long enough to get information about what had happened and where it had happened so she could she could send a deputy.

On the tape, Megan Goff admits to shooting her estranged husband because she said he found out where she was hiding and had said he was going to kill her and the children.

“I just killed my husband,” Megan Goff screams on the tape. “He said he was going to kill my babies.”

“I opened the door to go in, I found, to the left, Bill Goff laying there with his legs out, behind the rest of the door, shell casings, and Megan Goff on the opposite side of the room. There were two semi-automatics next to her, about four or five feet away,” Van Keuren said.

“She was in a somewhat hysterical state. She kept saying ‘he’s going to get me, he’s going to kill me,” Van Keuren said. He said he and Deputy John Majher managed to calm Megan Goff down once she was taken outside the residence. He said they made telephone calls to make certain her children were okay.

Megan Goff told authorities she had left her son and daughter with family members in Kentucky when she went to Bill Goff’s house.

Van Keuren testified that Goff said she killed her husband because he had threatened to kill her and the children on his day off, which was the next day.

She repeated her story to Detective Aaron Bollinger when he arrived approximately 20 minutes later.

Bollinger testified Megan Goff told him she took two guns with her that night because Bill Goff, who had taught her to use a gun, had always told her to always carry two guns because one could jam and once you start firing, you don’t stop.

Bollinger testified Megan Goff told him she had hoped to get to his house before he got home from work at Duke Energy and had driven at a high rate of speed from her grandparents’ house in Worthington, Ky., hoping to do so but was unsuccessful.

Bollinger told the court Bill Goff had no weapons on him at the time he was killed.

A former friend and neighbor, Pat Schilling, testified that he had known Bill Goff his entire life and the two men were very close for a period of time after Bill Goff’s father died,

“Up until he and Megan got close,”

Schilling said. Schilling said he knew Megan and she was very polite but they did not develop the same kind of relationship, possibly because of a sizeable age difference. Schilling said for the first few years of their marriage the Goffs seemed happy.

“Did you ever observe them fighting?” Anderson asked.

“Did you ever observe them quarrelling?” Anderson asked.

It was Schilling who took Bill Goff into his home after his domestic violence arrest in January 2006. He said Bill Goff stayed with him a couple of weeks at that time and, in March, the night before the murder.

Schilling testified Bill Goff had not only stayed at his house, Bill Goff had even parked his vehicle in the Schilling garage, something he had never done before.

Schilling said the night before the murder, Bill Goff received two telephone calls from Megan on his cellular phone. The first call he did not answer, the second one he did.

“Did you hear his making any threats,” Anderson asked Schilling.

“No,” the witness replied.

But under cross examination, defense attorney Paula Brown asked Schilling if he was aware that when the Goffs began seeing each other, Megan was only 15 years old. And how old was he, do you know?” Brown asked.

“Well up in his 30s,” Schilling replied.

“Would you agree with me he was 25 years older than her when he started to court her,” Brown asked.

Anderson said he may complete his case by today or Monday morning. Defense attorneys have indicated they may be able to complete their case by Wednesday of next week.