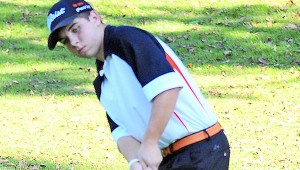 Zornes finds himself as the only returning starter for the Ironton Fighting Tigers who graduated six seniors from last year’s team that just missed a 12th trip to the state tournament.

Zornes missed by just two shots of qualifying for the state tournament as an individual player.

Being the only senior on the squad, as well as the only experienced golfer, Zornes finds himself in a different position since he always had veterans to play alongside of since his freshman season.

Former Ironton All-Ohio standout and now Marshall University golfer Nathan Kerns went through similar experiences when he was a sophomore and junior. Zornes said he has leaned on Kerns to help prepare him for what lies ahead.

“It’s going to be different from my first three years. Nathan has helped me a little bit since he went through it. I’m basically trying to take what I’ve witnessed the last few years and helping the other guys out,” said Zornes.

“They’ve only played a little golf. We usually have more competition.”

“Josh’s game has improved alot over the past four years. He’s definitely a hard worker. It takes a lot of self-discipline to work at a golf game. He’s matured a lot on the golf course,” said Kerns.

“He’s gotten stronger, but he’s mentally matured a lot and understands more about the game than he did three years ago.”

One thing that hasn’t changed for Zornes is his level of play, except that maybe it has continued to improve.

This summer Zornes played in the Tri-State Junior Golf Tour where he won all seven tournaments he entered to easily rack up the points championship and earn Player of the Year honors in the 16-18 age division.

The Player of the Year award is the second for Zornes who won the 13-15 age division two years ago.

“It felt better. I told myself to play your best and your normal game and you’re going to win. This year meant more because it’s my last year I’ll play. That was my goal at the beginning of the summer and I hit the ball pretty good all the time,” said Zornes.

The only tournament he missed was at Bellefonte when he was away on vacation.

Although he easily won the points standings, Zornes had three tough challenges along the way.

“The tournament at Riviera was like playing at the state. I was nervous because it was my first tournament and I was playing against a friend. It was tough being in the first two playoffs. By the third playoff I was used to it,” said Zornes.

In the other four tournaments, Zornes shot a 2-over par at both the Ironton Country Club and Sugarwood golf courses, shot a 6-over at Twin Silos and won with a 77, and his 2-over 73 claimed a win at Guyan Golf and Country Club in the season’s final tournament.

With the summer tour completed, Zornes is turning his full attention toward the upcoming season that gets underway Monday with the annual Ironton Invitational.

Coach Kerns said the key for Zornes is to play within himself and lead by example.

“The main thing is you have to control what you can do. Just being around the other guys has helped him understand that. Now he can give back and help the other guys learn. That’s what being on a team is about,” said coach Kerns.

“Individual-wise, my goal is going to the state, but I want us to win some matches. The guys are working hard. My goal for them is to get better each time out. It’s going to be different. There will be a lot of pressure on me, but I don’t think it will bother me,” said Zornes.

“Right now, I just want to take it one match at a time.”

For Josh Zornes, it’s an approach that’s no different than before.

CHICAGO (AP) — As much as Yonder Alonso might like to forget his first weekend at Wrigley Field, he may... read more