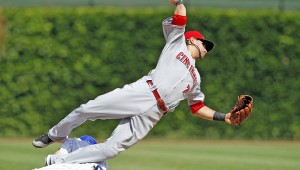 CHICAGO (AP) — The Reds and Cubs exchanged leads until Cincinnati finally came out on top thanks in part to an ill-timed slip by Cubs center fielder Marlon Byrd.

“We fought hard for that one big time,” Reds manager Dusty Baker said. “Just got to take it one at a time and hopefully get back to .500. That’s number one: get back to .500. We’ve been knocking on that door for a long time.”

“I slid about three feet,” Byrd said. “We didn’t lose on that ball, but that inning completely changes if I didn’t slip.”

Frazier, Drew Stubbs and Edgar Renteria all hit home runs for Cincinnati. Nick Masset (2-5) got the final out in the seventh.

Aroldis Chapman struck out the side in the eighth and Francisco Cordero worked the ninth for his 20th save in 25 opportunities, but his first chance since July 20.

“We were up, and coming from behind to get that win was even better,” Frazier said. “You got to take what you can get right now. We’ll get on this winning streak and see what happens.”

Starlin Castro and Blake DeWitt homered for Chicago, which had its seven-game winning streak snapped.

Cubs starter Randy Wells gave up six runs and eight hits in seven innings with a walk and a strikeout.

Before Sunday, Wells was 4-1 against the Reds with a 2.64 earned run average.

Reds starter Bronson Arroyo gave up four runs and five hits in six innings. In his previous five starts at Wrigley Field he was 4-0 with a 1.95 ERA.

“We’ve been struggling for a while now,” Arroyo said. “We’ll take them any way we can get them. Those guys battled back and we battled back again.”

Cincinnati took a 6-2 lead after Edgar Renteria hit a two-run homer in the fifth, but the Cubs came back on a two-run shot by Blake DeWitt in the sixth and took the lead with a three-run seventh.

Tony Campana hit the Cubs’ third consecutive single of the inning to score a run, Byrd hit a ground-rule double for the second, and Aramis Ramirez came home for the go-ahead run when Masset’s first pitch against Geovany Soto got away from Hanigan.

“Yesterday I left eight on. Today was nice to get a big hit in a situation where we need it,” said Byrd, who was 3-for-3 with a run and two RBIs.

Castro added two hits, including a tying solo homer in the third, to run his NL-leading total to 150. Chicago went up 2-1 later in the inning when center fielder Stubbs appeared blinded by the sun, allowing Byrd’s fly to deflect off his glove for an RBI double.

Frazier put Cincinnati back on top with a two-run homer in the fourth, and Stubbs later scored on a wild pitch.

Dave Sappelt, called up from Triple-A Louisville before the game, made his big league debut and singled in the sixth for his first hit. He later made a diving catch in left field to rob Soto of extra bases in the fourth.

“Sappelt made some outstanding defensive plays,” Baker said. “He saved some runs today. I can tell he’s been working at it and he’s going to get even better.”

NOTES: Plate umpire Paul Nauert left the game after the top of the eighth inning due to the heat. First base umpire Doug Eddings took over behind the plate. . Reds 2B Brandon Phillips (sprained right ankle) was not in the lineup Sunday. He was injured in a collision with Stubbs in the fifth inning on Saturday and was replaced by a pinch-hitter in the sixth. . The Reds placed OF Chris Heisey (strained left oblique) on the 15-day DL and recalled Sappelt from Triple-A Louisville. . Cubs RHP Matt Garza (5-8, 3.78 ERA) is set to face Washington in the series opener against the visiting Nationals. He has allowed nine runs in 7 2-3 innings in his two career starts against Washington. . The Reds head home to host the Colorado Rockies. Homer Bailey (6-5, 4.30) will start Monday. He is 0-2 with a 5.74 ERA in 15 2-3 career innings against Colorado.