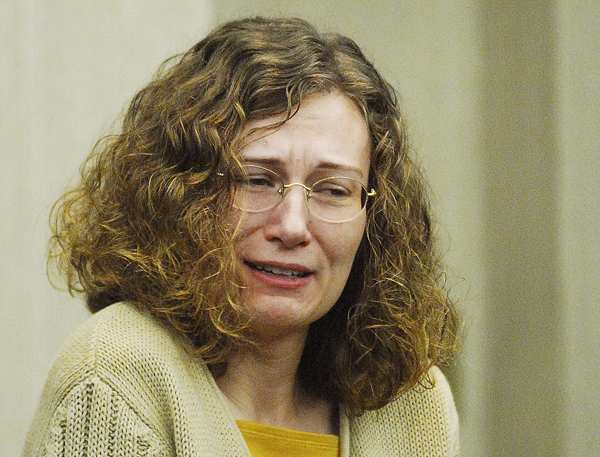 Megan Goff testifies in Lawrence County Common Pleas Court Monday. Goff told the jury that she had been in an abusive relationship since she was 19 and that her husband, Bill Goff, made death threats against her and her children during their marriage. -- The Tribune/Jessica St. James

Megan Goff took the stand in her own defense Monday morning as her murder trial continued in Lawrence County Common Pleas Court.

Goff, 31, formerly of Hamilton Township, is accused of killing her estranged husband Bill Goff in 2006. During a bench trial in 2007, she was convicted of the murder but the Ohio Supreme Court overturned that conviction and ordered that she get a new trial. That jury trial started a week ago before visiting Judge Patrick McGrath.

Megan Goff has maintained that she shot Bill Goff following years of abuse and that he made threats to her and their children.

McGrath dismissed one of the jury members because of illness Monday. The male member was replaced with a male alternate, so the jury ratio remains at four women and eight men.

Under direct examination, Goff testified that she was raped by a babysitter when she was 4-years-old and that her perpetrator had threatened to kill her family if she told anyone.

She also testified Monday that a friendship with Bill Goff started when she was a teenager living next door to him. The relationship developed until the two were having sex, she said. Despite an approximately 20-year age difference, the two were engaged the day she graduated high school and they married when she was 19 years old, she testified.

Goff testified that problems in their marriage started their wedding night and that there were various rooms throughout the house that Bill Goff did not permit her to enter without his permission. Her husband would threaten her, laying a gun beside her head, Goff said.

Her husband also required that she keep her two small children quiet so they would not wake him, she testified. Bill Goff worked a swing shift and often slept during the day, she said.

Her husband didn’t allow her to leave the house and carried a firearm with him, even while he was inside the home, she said.

“Even if he was taking a shower there was a gun in the room,” Goff told the court.

She spoke of one incident that occurred while she was pregnant with her son, now 6. The woman was having morning sickness one night and the noise of her vomiting woke up her husband, who then put a gun to her head, she said.

“I just knew I was going to die because I woke him up,” she testified.

On another occasion, Megan Goff decided to go on a trip to St. Louis with her then 1-year-old son along with a group of women she met on a pregnancy website. Bill Goff had at first agreed to her going, but changed his mind prior to the trip, demanding that she stay home. By then Megan Goff was acting as a coordinator for the trip and felt she “had to be there,” she said. She said Bill Goff threatened to kill her if she went on the trip.

“He told me if I left he would kill me when I got back,” she testified.

Despite his threats, Megan Goff went on the trip. The relationship between her and her husband only deteriorated more after she returned from the trip, Goff testified.

The woman also testified about an alleged domestic incident in January 2006, two months before Bill Goff was killed. The man kicked her young son, she said.

The incident was reported to the Lawrence County Sheriff’s Office. During a search of the house, deputies found 63 guns, many more than Megan Goff thought there were, she said.

“They were everywhere I wasn’t allowed to go,” Goff said.

Following the incident, Goff told the court she spent time at a domestic violence shelter in Ashland, Ky., before getting an apartment in Mason County, W.Va. It was in a secluded location, she said.

Despite Megan Goff’s efforts to hide, Bill Goff found out she was living in West Virginia, she testified.

On March 17, 2006, the day before Bill Goff was killed, Goff testified, she and her estranged husband had three phone conversations during which he had threatened to kill her and their two children.

She begged him to spare the children, she said.

“I didn’t know what to do and I couldn’t let them die,” a tearful Goff said. “I just kept telling him to take me.”

Goff contended that on the day of the shooting, March 18, 2006, she went to Bill Goff’s home only to talk to him. March 18 was a Saturday, and Bill Goff had threatened to kill her and the children the following Monday, which is Megan Goff’s mother’s birthday, she testified.

“He said your mom will have a birthday present — two dead grandkids and a dead daughter,” Goff said.

That day she hoped to get to Bill Goff’s home before he got home from work. His place of work was one of the only places where he did not carry a gun, she said.

Goff testified that she went to the door and when Bill Goff answered, she went inside the house, something she had not planned to do.

Once inside, she felt trapped, she said.

The other doors in the house were inaccessible and Bill Goff stood in front of the front door, she said.

Goff shot her estranged husband 15 times in the head and torso.

During cross examination by Lawrence County Assistant Prosecutor Brigham Anderson, Goff testified that despite her claims of domestic abuse, there were no physical altercations between her and her husband or her husband and the children prior to the incident in January 2006.

Anderson also called into question the woman’s decision to purchase a gun to give her husband as a Christmas gift a few years before his death. He asked why she would give him such a gift after he had threatened to kill her. The gun would ultimately become the murder weapon.

Bill Goff was the assistant chief for a local volunteer fire department, a position that for years caused him to be awaken from sleep during the day and night to handle fire calls, Anderson contended, calling into question Megan Goff’s statement that Bill Goff didn’t like being awaken while he slept.

Goff responded that Bill Goff was frustrated with fire calls as well.

Anderson played a nearly 30 minute portion of an approximately 80-minute phone conversation between Bill and Megan Goff on March 4, 2006, about two weeks before the shooting.

Much of what Bill Goff says on the tape was inaudible from the courtroom gallery, though jury members were given a transcript.

During the phone conversation, Megan Goff asks Bill Goff how he knew that she was in West Virginia.

“You said you were going to kill the kids and myself, did you not?” Megan said on the tape.

She also tells the man she wants a divorce and that their son had to have a CAT scan following his kicking him.

Bill Goff can be heard telling Megan Goff that his threats were “for shock value” and that he did not mean them. He asks her if she was serious when she threatened to kill herself.

Megan replied that he took her threat of suicide out of context, that she only said she would kill herself if she had a terminal illness.

She later said, “If you did it for shock value, congratulations, you shocked me. I’m scared out of my mind.”

Anderson contended that Goff had intended to shoot Bill Goff the night before the murder, and even went by his house, but could not find him. She had also retrieved a gun that night from her mother’s home, he contended.

“The truth is you were planning on killing him that night, weren’t you?” Anderson said.

On the day of the shooting, Goff said, she saw something in Bill Goff’s hand that “made her uncomfortable,” she said. In the dark, she could not tell if the item was a gun, she said.

The item in Bill Goff’s hand turned out to be his cellular phone, which was identical to the one Megan Goff used, Anderson said.

Goff told Detective Aaron Bollinger of the sheriff’s office that she had gone to Bill Goff’s home that night to either calm him down or let him kill her, Anderson said.

“Why did you need two guns?” Anderson asked.

“She was very upset, distraught, worried,” Michael said of Goff when she came to the shelter.

Goff stayed about a week at the shelter, Michael said. In one incident during Megan Goff’s time at the shelter, a man matching Bill Goff’s description came onto the property of the shelter, causing the staff to implement a lock-down.

Under cross-examination by Anderson, Michael testified that she was not sure that the man who came on to the property was Bill Goff.

The defense continues with its case today.

Is it marriage or not?