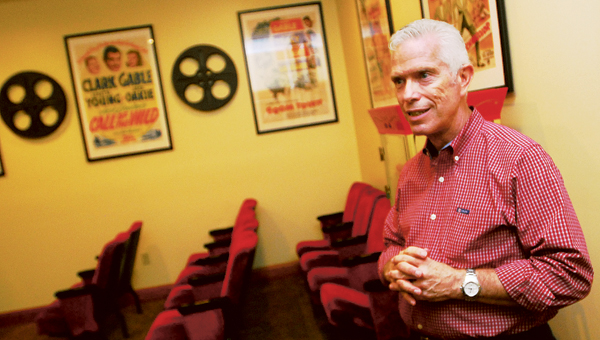 Congressman Bill Johnson visits the movie room at the Close to Home III facility in Ironton.

During a tour of the assisted-living facility, Johnson met with local officials and representatives from the Finance Fund, which helped to finance the construction of the facility.

The building that houses Close to Home III was originally built in 1910 as the St. Lawrence School. The project rehabilitated the historic building.

Finance Fund, a nonprofit organization that works to put capital into economic development projects in the state’s most distressed communities, partnered with the project’s owners to contribute a $2.7 million loan in New Market Tax Credits.

The project was unique in that New Market Tax Credits aren’t typically used to finance residential facilities, Finance Fund CEO James Klein said. In this case, Finance Fund was able to identify the project as a commercial facility because of the way the business does its bookkeeping, Klein said.

Other funding for the historic restoration included $500,000 grant from the Community Development Block Grant Economic Development Program and a loan from the Huntington, West Virginia-Ironton, Ohio Empowerment Zone, Inc.

Klein said the congressman’s visit was a way to show off the fruit of the nonprofit’s labor.

“We’re quite proud of our investment down here and the fact that they’re doing so well,” he said. “This is a first-class facility.”

Over the past 10 years in Johnson’s Sixth District, Finance Fund has helped fund 197 projects, Klein said.

Charles Kunkel, who co-owns the facility along with Sharon Hartwig, said he is pleased that Finance Fund considers Close to Home one of its superior projects and that he’s pleased Rep. Johnson visited.

The visit was also a chance for local leaders like Mayor Rich Blankenship and Bill Dingus, executive director of the Lawrence Economic Development Corporation, both of whom attended, to talk with Johnson.

Blankenship said he is glad the congressman stopped by and is willing to listen to the concerns of state and local officials.

“It’s good to have that rapport with state and federal officials,” Blankenship said.

Johnson said he visited the facility that benefited the elderly and one that benefits children because the two are at opposite ends of the spectrum.

He wants to find out how they operate and how he can best support them, Johnson said. He added that he enjoyed his time in the county.

“We always do every time we’re here,” Johnson said.