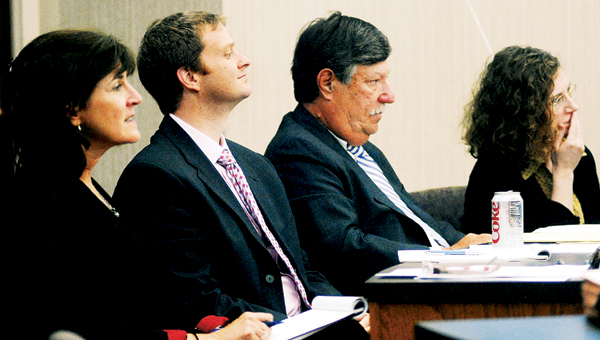 The jury in the Megan Goff murder case will return to the Lawrence County Courthouse this morning to continue discussing whether Megan Goff should go to prison for shooting and killing her estranged husband five years ago or should go free because she was an abused woman.

Visiting Judge Patrick McGrath handed the case to the eight-man, four-woman jury at 11:43 a.m. Thursday, but the jury likely did not begin actual deliberations until after the noon lunch. Jurors opted to go home at 5 p.m. and return today.

In his closing statement, Assistant Lawrence County Prosecutor Brigham Anderson told the jury there was “overwhelming evidence” that Megan Goff planned to shoot Bill Goff, otherwise she would not have gone to his home with two guns the night of the shooting.

Anderson described Megan Goff as a manipulative woman who adjusted her emotions and her story to win sympathy when she thought she needed it.

Anderson pointed out that in one of the two statements Megan Goff gave Detective Aaron Bollinger after the shooting, she makes a telling statement about the incident. “She says, ‘I’m quiet at one point on the 911 tape and then I just started screaming again.’ Megan already has it in her mind. She knows that tape is going to be played one day. As we learned, she can turn it on and she can turn it off,” Anderson said.

He said jurors should consider the January 2006 domestic violence allegation and the tape Megan made of it.

“You don’t see things Megan said happened,” Anderson said. He pointed out that Megan Goff told authorities the tape showed Bill Goff kicking their son, Alex, who, Anderson said, is laughing at the end of the tape.

The prosecutor pointed out that just minutes before a sheriff’s deputy arrived to answer her domestic violence call, on her own tape, Megan Goff is seen calmly taking inventory of family possessions and yet former deputy Wes Collins described her as frightened and upset.

Anderson reminded the jury it was Megan Goff who initiated contact with Bill Goff in late February after she had moved to Mason County, W.Va., following her domestic violence complaint and allegations her estranged husband was stalking her.

In response to defense claims that a Feb. 25, 2006, taped telephone call was a “smoking gun” in the case, Anderson reminded jurors that Bill Goff is heard saying on the tape he had only threatened Megan after she threatened suicide and that he had done it for shock value.

Anderson said, during that phone call, Megan never asks Bill why he threatened her all those years, she never brought up abuse and Bill Goff told her he would never really hurt her or their children.

Anderson said, on the night before he was killed, Bill Goff stayed overnight with neighbors, the Schillings, and even put his car in their garage to avoid being spotted by his estranged wife, who admitted she had been looking for him the day before she shot him.

Anderson said even Dr. Bobby Miller, Megan Goff’s psychiatrist, said Megan Goff went to Bill Goff’s home the night of the shooting to either resolve their conflict or attain some measure of resolution.

The prosecutor told the jurors on the day of the shooting there had been no contact between the couple. The day before the shooting, when Bill Goff was supposed to have made his threats to kill her and their two children, people who witnessed the phone call said he had never made any threats.

As he spoke Thursday, Anderson had a power point presentation on a screen behind him. At one point, photographs of Bill Goff’s autopsy flashed on the screen. At other times, it summarized the major points of the prosecution’s case.

Anderson also pointed out that it made no sense for Bill Goff to threaten Megan Goff with a gun every day of her life yet teach her to shoot firearms.

“Somebody threatening you and holding a gun to your head isn’t going to teach a person how to shoot and how to shoot effectively,” Anderson said.

Anderson told the jury that for Megan to be able to claim self defense, she had to prove she did not cause the situation that led to the shooting, did not violate a duty to retreat and had to be in imminent fear or grave bodily harm or death. Yet she went to the home of an unarmed man taking two guns and shot him 15 times.

Brown reminded jurors Bill Goff was a middle-aged man who engaged in a sexual relationship with a teenaged girl who was his next door neighbor. She said Bill Goff pursued Megan intensely and even started going to church after he learned she went to church.

She dismissed the testimonies of Don Fraley, Roger Lovett and James Sunderland, all friends and co-workers of Bill Goff, pointing out none of them had had frequent contact with the Goffs after their marriage.

“The only person who knew Bill Goff was Megan and Megan knew him all too well,” Brown said.

She painted the picture of a woman who learned to live within Bill Goff’s stringent world with all of his rules, as many abused women do.

“Once she got married the abuse started,” Brown said.

As did Anderson, Brown also told jurors to consider the Feb. 25, 2006, telephone call between the two during which Bill Goff admits to having threatened Megan Goff and the children.

Brown said Megan Goff went to her estranged husband’s home not to kill him but to talk to him.

Bluth dismissed the issue of Miller being paid for his part in the case, a point made by the prosecution during Miller’s testimony earlier this week.

“People get paid for their services. There’s nothing wrong with that,” Bluth said.

Bluth said the idea that Megan Goff went to Bill Goff’s home to kill him was not supported by evidence or Megan Goff’s testimony.

“She went to the home March 18 to talk, to talk him out of killing the children,” Bluth said. “She had no intention of killing him when she went there that night.”

Bluth said in spite of the prosecution’s contention Megan Goff shot Bill Goff immediately after going to his home, in reality they spoke for 10 or 15 minutes and during this time Bill repeated his threats.

“She had every reason to believe he had more guns, different guns and his house was a dangerous place for her to be,” Bluth said. He characterized Megan Goff as courageous for having gone to Bill Goff’s house in the first place on March 18.

Bluth said there was no prior calculation and design on Megan Goff’s part, which is an essential element to an aggravated murder charge.

“Killing somebody is not always murder,” Bluth said. “This is a case about a battered woman shooting her husband in order to save her children.”

Contrary to Anderson’s contention Megan Goff could fake her emotions, Bluth said there was nothing phony about the 911 tape in which Megan summoned authorities after the shooting.

“It was clear she was in emotional distress that night,” Bluth said.

Bluth argued even though she went to Bill Goff’s home the night of the murder, Megan Goff did not cause the situation that led to the shooting and because she was invited in, she did not violate a duty to retreat.

“He said he was going to kill her and she had nowhere to go,” Bluth said.

He said, regarding the third element of defense, that she did believe she and her children were in danger because he had threatened to kill them.

“Megan Goff acted in self-defense when she killed Bill Goff March 18,” Bluth said. “She’s been to hell and back and you must find her not guilty.”

But in his rebuttal statement, Anderson said under Ohio law, words alone do not justify the use of deadly force.

“This is not a case of self defense or the defense of loved ones,” Anderson said. “Her kids were in Kentucky.”

He pointed out that imminent harm means immediate harm.

“She planned this murder and her getaway was that she thought somehow she could convince you,” Anderson said. “This was cold-blooded, premeditated murder.”

Under instructions from McGrath, jurors can find Megan Goff guilty of aggravated murder if they think she planned to kill Bill Goff or lesser charges of murder or voluntary manslaughter.

Goff, 31, was convicted of aggravated murder in 2007 but that conviction was overturned by the Ohio Supreme Court late last year.

And then there were 565. Right now there are 571 sites the county wants FEMA money for in order to... read more