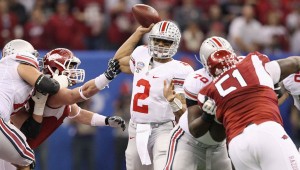 Terrelle Pryor will have an opportunity to pursue his NFL dreams, with one significant caveat: The former Ohio State star must still pay for breaking NCAA rules while he was in college.

The league announced Thursday that Pryor is eligible for its supplemental draft, but he won’t be allowed to practice for the team that selects him until Week 6. Pryor gave up his final season with the Buckeyes following an investigation into the team’s memorabilia-for-cash scandal.

He would’ve had to sit out five games had he chosen to return to Ohio State.

“We accept that voluntarily,” Pryor’s agent, Drew Rosenhaus, told The Associated Press. “It’s a small price to pay for him to have a chance to pursue his dream of playing in the NFL.”

A small price that could have broader consequences.

Commissioner Roger Goodell and NFLPA executive director DeMaurice Smith worked together on the decision, Rosenhaus said. The league hopes it will dissuade future college players who run afoul of the NCAA from trying to use the NFL as a means of escaping punishment. But it also creates this dilemma: Does the NFL have the authority to suspend a player who doesn’t even work for the NFL yet?

“I know players are concerned about the message this sends,” said Browns linebacker Scott Fujita, a member of the players’ executive committee. “Granted, making this ‘deal’ was an individual decision made by a player with counsel from his agent and lawyer. They have every right to make whatever deal they want for his personal future. That being said, the general concern now is how far into Pandora’s box this may go.

“This raises so many questions, and I think players are rightfully concerned.”

The league informed clubs that Pryor “made decisions that undermine the integrity of the eligibility rules for the NFL draft.” Among those actions, the league said, were the hiring of an agent in violation of NCAA rules and a failure to cooperate with the investigation that cost Ohio State coach Jim Tressel his job. The NCAA committee on infractions is working to determine the school’s final penalties.

League spokesman Greg Aiello tweeted you can’t break the rules as Pryor did “and get a free pass into the NFL.”

Goodell did not confer with NCAA President Mark Emmert on the decision, said Bob Williams, a spokesman for the college sports governing body. The commissioner “called Mark to inform him of his intent. Nothing more,” Williams said.

One of the points of contention during negotiations for a new NFL labor agreement was the authority given to the commissioner to hand out punishment. In the end, there were no changes to Goodell’s position, but his decision to suspend Pryor worried players.

“It’s a little questionable, but I guess they’re really trying to not allow guys to manipulate the NCAA system and be able to take a quicker path to the NFL,” said Bills safety George Wilson, an NFLPA representative. “I see what the commissioner’s trying to do at his end as well, but it’s still tough to take.”

“It’s still a tough pill to take, knowing that you’re being suspended for something that took place while you were at college. But we’ll see what happens.”

David Cornwell, Pryor’s attorney, said he was pleased that quarterback is eligible for the supplemental draft — which was his “primary objective” — although having to sit out five games was not the ideal situation.

“The NFL’s concern all along was protecting the integrity of the draft process,” Cornwell said in an email to the AP. “We understood their concerns, accept that they are legitimate concerns, and worked through the process to demonstrate that Terrelle’s decisions regarding making himself eligible were reasonable, if not perfect. The commissioner gave serious consideration to the various issues and decided to balance those issues by allowing Terrelle into the supplemental draft with conditions.”

Cornwell said it was “not a perfect result,” but it was evidently good enough for Pryor, who tweeted: “God bless and thanks for support! Time to have a little fun!”

Pryor will have a pro day Saturday in Pittsburgh for all 32 NFL teams, and he’ll work out, throw and take part in agility drills — similar to what he would do at the NFL combine. Once he’s drafted, he’ll be allowed at team headquarters and be able to take part in meetings for whichever team drafts him.

“He’s putting all of this behind him and he has learned a lot from the mistakes he has made in the past and is excited about starting fresh and getting his career going,” Rosenhaus said. “As soon as he gets picked, he’ll be on an airplane and be going right to work.”

Other players eligible for the supplemental draft are: defensive backs Torez Jones of Western Carolina and Tracy Wilson of Northern Illinois, defensive ends Keenan Mace of Lindenwood and Mike McAdoo of North Carolina and running back Caleb King of Georgia.

The supplemental draft allows qualified underclassmen who did not request early entry into the regular draft to have a chance at entering the NFL. Teams submit picks and are awarded players if their bid — for which round they would take that player — is highest. Teams then lose the corresponding pick in next April’s draft.

If he hadn’t been ruled eligible, Pryor would have had to wait until next April for the 2012 draft.

Regarded as the nation’s top quarterback recruit coming out of high school, Pryor led Ohio State to an 8-1 record as a starter and was Big Ten freshman of the year. He took the Buckeyes to the Big Ten title the following season and a victory in the Rose Bowl. He was named the game’s MVP after Ohio State beat Oregon 26-17.

As a junior, Pryor had his best season statistically, throwing for 2,772 yards and 27 touchdowns with 11 interceptions. He also ran for 754 yards and four scores while helping the Buckeyes win the Sugar Bowl.

Shortly before the game, it was revealed that Pryor and other players traded Buckeyes memorabilia for cash and discounted tattoos. In the following months it became clear that Tressel knew about the improper benefits in the spring of 2010 but didn’t inform his bosses, as was required under his contract and NCAA rules. Tressel was forced out of his job May 30 and Pryor left Ohio State soon after.

Now, Pryor will get a chance to start his NFL career — even if it happens in Week 6.

“I’m proud of him,” said Jets wide receiver Santonio Holmes, a former Ohio State star who was wearing a red Buckeyes cap Thursday. “I thought he did a great job while he was there. The things that he had to overcome thus far can be pushed behind and hopefully he can start a better career here in the NFL.”