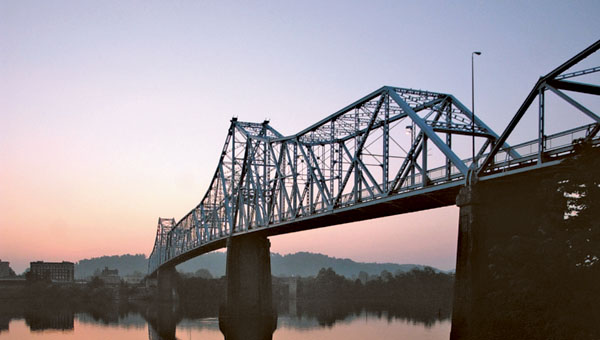 Construction on the new Ironton-Russell Bridge has been delayed — less than seven weeks from the date the Ohio Department of Transportation had planned to bid the $85 million project.

Now the project will be bid after Oct. 6 but by June 2012. Ironton Mayor Rich Blankenship said ODOT officials told him during a meeting Monday in Blankenship’s office.

The project will be lumped in with the Portsmouth Bypass. ODOT officials told him they want to use a private-public funding program that new legislation will allow them to use, he said.

“I think it is totally unacceptable,” Blankenship said. “They have pushed this project back for way too long.”

ODOT’s decision came less than a week after the county’s newly formed Transportation Improvement District put the bridge as its first priority. The TID was applying to ODOT for additional funds to help in the construction.

“I am very disappointed that, this late in the game, they are postponing it to try out a new method of financing for a project that we have delayed twice already,” Doug Cade, county engineer, said this morning.

“Here we have spent millions in the original design and then the redesign and they continue to postpone the project and cost more money.”

Built in the 1920s, the bridge has served as a link between downtown Ironton and Greenup County, Kentucky and the western end of Ashland.

“It is a bridge that has outlived its useful life from all the reports the we have,” Cade said.

If ODOT wants to explore the opportunity to blend private and public financing options, Cade said he would not object if that was tried on a project such as the Chesapeake Bypass.

“I’d welcome that,” he said. “But here we are at the point of bidding this project. Let’s look at a project that will be done next year.”

Cade was informed of ODOT’s decision from Blankenship, after officials met with the mayor Monday. Another problem with delaying the bridge is that next year the Army Corps of Engineers will be revoking the permits of all projects not under way because of new regulation changes.

“It takes years to get a permit for a bridge,” Cade said. “It is not just 45 days and get a permit. This project is a major undertaking. Who knows if we have to go through the whole process again.”

“We feel it has been delayed long enough already,” Boggs said. “We have some long-term safety concerns about the bridge. We will get to the bottom of this and see what the situation is. I think the citizens have been put off enough on this project.”

Blankenship said after he got the news he started to call the area’s state and federal representatives. Blankenship was on his way to Columbus this morning for a meeting with Rep. Terry Johnson about the bridge. Blankenship also plans to meet with ODOT director Jerry Wray.

Blankenship said he doesn’t know who made the final decision to delay the project but he plans to find out.

“I’m going to the people who make these important decisions to find out more of what’s going on,” Blankenship said. “I can see if the bridge was a couple years away but we’re six and a half weeks away and the funds are available.”

Blankenship said the new bridge is critical to Ironton and Lawrence County. Blankenship said he had rushed through legislation on the city’s part to be sure that the city was ready for the Oct. 6 sale date.

Blankenship said he encourages residents to call their state and federal representatives to voice their concerns over the project’s delay.

With the Transportation Budget Bill (House Bill 114) going into effect in July, ODOT can now enter into partnerships with private entities for the delivery and financing of transportation projects, according to a release from ODOT. Public-private partnerships will allow ODOT to work with the private sector in developing new and innovative ways to develop, finance, maintain or operate a transportation facility.

“While this will have an immediate impact on the start of construction for this project, it could have a greater, more far-reaching impact on the long-term economic health of the department,” said District 9 Deputy Director Vaughn Wilson, noting that current cost estimates for the Ironton-Russell Bridge replacement project are between $85 and $90 million.

HAMILTON TOWNSHIP — The Lawrence County Sheriff’s Office is investigating the discovery of a body at the Rumpke, Inc. recycling... read more