Raiders select QB in 3rd round of supplemental draft 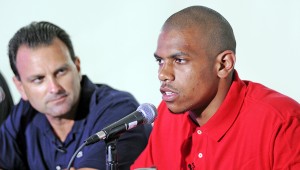 NAPA, Calif. — The Oakland Raiders always have been seduced by size and speed so it came as little surprise that they used a third-round pick Monday in the NFL’s supplemental draft to select former Ohio State quarterback Terrelle Pryor.

Pryor’s agent, Drew Rosenhaus, said his client was excited about going in the third round after waiting until last Thursday to find out he’d even be eligible for the supplemental draft and not working out for teams until Saturday.

“We’re tickled and thrilled that Terrelle went in the third round and to the Raiders,” Rosenhaus said. “The third round is quite an accomplishment for a young man who had his pro day 48 hours ago and didn’t know he would be in the draft until Thursday morning and wasn’t able to meet with any decision makers.”

The Raiders used the 18th selection of the third round for Pryor, forfeiting a pick in that round in the 2012 draft.

Pryor immediately headed to the Bay Area after being drafted and Rosenhaus said he hoped to finalize a contract as soon as possible to get Pryor on the practice field. Rosenhaus has already negotiated a third-round deal with the Raiders this summer with rookie cornerback DeMarcus Van Dyke.

“We’re optimistic this will be a smooth negotiation,” he said. “We enjoy working with the Raiders and he’s very excited.”

Pryor will be able to practice immediately after signing and play in the remaining two exhibition games. But he will not be eligible to practice with or play for Oakland during the regular season until the team’s sixth game.

While there has been some speculation that Pryor’s future could come as a receiver or tight end, Raiders coach Hue Jackson said he views Pryor as a quarterback and he will start his career there.

“The guy had a very storied career at Ohio State,” Jackson said. “He can throw it, he can run with it. He’s smart, he’s tough, he’s played in big games. He’s another young athlete that we’ll add to the mix that plays quarterback and we’ll work with him and get this guy to be a good player.”

When he was allowed to enter Monday’s draft, he was handed a five-game suspension by Commissioner Roger Goodell — the same number of games he would have sat out had he returned to Ohio State. Pryor has said he will not appeal the suspension.

Pryor gave up his final season with the Buckeyes after an investigation into the team’s memorabilia-for-cash scandal that cost coach Jim Tressel his job.

His selection by the Raiders hardly is surprising. Oakland often makes bold moves in the draft because owner Al Davis covets size and speed. Pryor ran a 4.36 in the 40 during his workout for 17 NFL teams Saturday. At 6-foot-5 and 232 pounds, he is similar in height to JaMarcus Russell, the LSU quarterback chosen No. 1 overall by the Raiders in the 2007 draft.

But Pryor is much more mobile. As a junior, Pryor had his best season statistically, throwing for 2,772 yards and 27 touchdowns with 11 interceptions. He also ran for 754 yards and four scores while helping the Buckeyes win the Sugar Bowl.

“We all know how Al Davis likes big players who can run and Terrelle brings a dimension of size and speed that’s unique to the quarterback position,” Rosenhaus said. “The Raiders are a good fit for him because they have had an unsettled quarterback situation for a number of years and have worked in a number of different players. Any young quarterback would like the opportunity to go there and compete and be the guy.”

Oakland’s starting quarterback is Jason Campbell, now in his second season with the Raiders after being acquired from Washington, where he spent five seasons. Campbell is in the last year of his contract, as are backups Kyle Boller and Trent Edwards.

The Raiders considered drafting a quarterback to groom for the future in April but did not find the right fit. Now they have Pryor to fill that role.

Pryor said he’s thankful for the opportunity to play in the NFL.

“The type of guy that you’re getting is a competitive guy, a feisty guy that wants to win and will do anything to win,” he told the NFL Network. “Work hard and a person that is just opportunistic. I’m just waiting for an opportunity and when I get it, I’m going to have success.”

Pryor will be joined by a former teammate when he signs with the Raiders. Oakland had drafted cornerback Chimdi Chekwa in the fourth round in April and Chekwa gave Pryor a glowing review.

“He was a guy who can make the throws on the football field,” Chekwa said. “He also has that threat of scrambling and running. When we needed a big play in college, he made that play. When we went against him in practice, first-team offense versus first-team defense, we had to spy him, do different things. He makes you have to account for the quarterback running.”

Oakland is now without picks in the second, third and fourth rounds next year. The Raiders traded the 2012 second-round pick along with a 2011 seventh-round selection for third- and fourth-round picks this past draft to take offensive lineman Joe Barksdale and running back Taiwan Jones. They sent their fourth-round pick a year ago to the Redskins for Campbell.

Oakland could recoup some picks as compensation for losing Nnamdi Asomugha, Zach Miller and Robert Gallery as free agents.