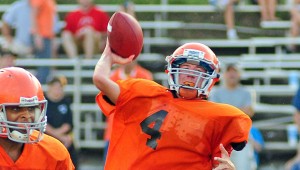 Not only are the Ironton Fighting Tigers replacing half their starting lineup on both sides of the ball, the visiting Wheelersburg Pirates are replacing all but three positions.

Youth and inexperience will be the two key factors when the two teams meet in the traditional season opener between two of Southern Ohio’s top programs.

While it would appear that Ironton has the slight edge because of more veterans, Fighting Tigers’ head coach Bob Lutz said both teams are in the dark.

“It’s the first game so you don’t know for sure what you’re guys can do or how they’ll respond to game conditions, and you don’t know much about their guys because they have a lot of new players,” said Lutz.

“We’re going to line up and run right at you. Wheelersburg is going to run and throw and they’re probably going to give us a bunch of different looks that we haven’t seen since it’s the first game. As the season goes along, you see about everything over and over, but it’s all new the first time out.”

Wheelersburg has only senior quarterback Alex Shears back on offense. The 6-foot-2, 185-pound Shears turned into a two-way threat last season and figures to throw a lot out of the shotgun formation.

Senior Brett Hood got some playing time last year and will be the top running threat. The fullback will be senior Mark O’Brien and the duo will flip over to anchor the defense at linebacker.

The Pirates have several sophomores playing at the wide receiver positions and only James Hudgel and Eric Ball at the guards have game experience.

“They have a good quarterback and they’re going to put the ball in his hands as much as possible,” said Lutz. “They’re going to spread the field and try to open up passing and running lanes for (Shears).”

Ironton is always a slow starter and never starts to click until the third or fourth game of the season. Lutz said that makes his team very vulnerable, especially in the season opener.

“The thing you have to do is find out who can do what as quickly as possible before you’ve got two or three losses,” said Lutz.

QB not the only question facing Fickell, Buckeyes

The Associated Press COLUMBUS — Swirling around the 2011 Ohio State Buckeyes are more questions than one would hear in... read more