Buckeyes have good replacements for defense 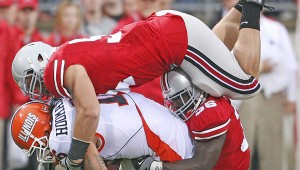 Ohio State’s John Simon (54) Brian Rolle (36) stops Illinois’ Michael Hoomanawanui (16) after a reception. Simon is one of the returning veterans for the Buckeyes’ defense this season. (MCT DIRECT)

That’s again the case for the 18th-ranked Buckeyes, who lose seven stoppers including lineman Cam Heyward, their top two tacklers in linebackers Brian Rolle and Ross Homan, and frontline guys in the secondary Jermale Hines, Devon Torrence and Chimdi Chekwa.

Yet no one seems to be overly concerned in preseason camp.

“We lost a lot of guys who we’re really going to miss,” lineman John Simon said. “But we’re always reloading. We’ve got a bunch of great athletes who can step up to the plate. Our motto is, ’Next Man Up.’ So we’ve got guys stepping up every day.”

Among those clamoring to step into the void are Simon, Nathan Williams and Johnathan Hankins on the line, Andrew Sweat, Etienne Sabino, Storm Klein, Ryan Shazier, Curtis Grant and Jordan Whiting at linebacker and Travis Howard, Dionte Allen, Dominic Clarke, Orhian Johnson, C.J. Barnett, Bradley Roby and Tyler Moeller in the backfield. Some (Simon, Williams, Sweat, Johnson) started most of last season, others saw plenty of action, still others are in the mix for the very first time.

So despite heavy losses from a unit that was fourth in the nation in total defense (262.2 yards per game), third against the rush (96.7 ypg), eight vs. the pass (165.5), fifth in scoring defense (14.3) and fourth in turnover margin (+1.15), no one is sitting around expecting the Buckeyes to be a sieve on that side of the ball.

The coaches have learned to expect inexperienced unknowns to jump right in and replace household names.

“I remember a similar situation where James Laurinaitis had to go in (in 2005). He was a freshman the second play of the Michigan game when Bobby Carpenter breaks his leg,” said interim head coach Luke Fickell, then the linebackers coach. “I know I was a lot more nervous than (Laurinaitis) ever was. Sometimes you look back on those things and you go, ’You know what? Those guys have confidence in what they’re doing and they’re not going to shy away when it’s their turn.”’

The current linebackers coach is Mike Vrabel, a three-time Super Bowl winner with the New England Patriots and former standout for the Buckeyes. He was hired to replace Fickell after his best friend was elevated to take over for former coach Jim Tressel, who left in the wake of the memorabilia for cash and tattoos scandal.

Vrabel has liked what he’s seen out of his charges.

“I don’t know how many guys we have that really want to play. We have to find out. We need some competition,” he said. “They’ve had a competitive camp. We need backups. If we’re going to have 11 strong guys we’re going to need to find guys that want to be out there.”

Things always seem to sort themselves out. Ohio State has held 62 opponents to 21 or fewer points over the last six seasons. The defenders also have placed in the top 10 in the nation in total defense four times in that span, finishing no worse than 14th.

So there’s a tradition to uphold.

Sabino, who has played in 26 games but is anxious for his first possible start, believes that all the controversy, questions and doubts don’t mean much. He said what everyone thinks about the defense now doesn’t mean that’s what they’ll be thinking in four months.

“We’re going to determine that this year,” he said. “We had great guys last year, but last year is last year. This year we’re looking forward to a new team and we have new horizons we need to reach.”

The Associated Press CINCINNATI — Those two home runs aside, Joey Votto thought he had a pretty lousy day at... read more