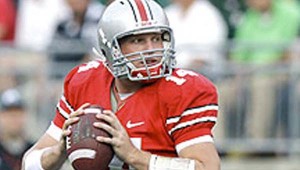 Joe Bauserman appears to be the choice of head coach Luke Fickell to start at quarterback for the Ohio State Buckeyes on Saturday. (MCT Direct)

COLUMBUS — Dressed in a white oxford shirt with an Ohio State logo on the chest — no tie, no sweater vest — Luke Fickell made the first big call of his head coaching career.

Fickell, an assistant elevated to replace Jim Tressel who was forced out in the midst of an NCAA investigation, said that fifth-year senior Joe Bauserman would most likely be the starting quarterback when the 18th-ranked Buckeyes open their season on Saturday at home against Akron.

Bauserman and true freshman Braxton Miller had battled for the starting job in recent weeks in camp. They were listed with an ‘or’ separating them on Ohio State’s two-deep roster this week.

“Joe would probably take the first snap,” Fickell said at his first weekly news conference. “Just talking with those guys, talking with the offensive staff, we know we’re going to need them both. The whole idea is we want to make sure that we can put them out there in front of 106,000 and see how guys respond.”

He said Bauserman got the edge because he’s seen more game action — although he has seldom played with a game on the line because he was behind departed three-year starter Terrelle Pryor.

“It’s leadership,” he said when asked what separated Bauserman, a former minor-league pitcher for three years in the Pittsburgh Pirates farm system. “It’s also what this team, where we were at the time. He’s done a really good job through camp. I’ve been impressed with the things we’ve asked him to do and what he’s done.”

“It doesn’t mean I haven’t been impressed with Braxton as well,” he said. “That’s why we’ve been impressed with him enough to list him in the ‘or’ category. But, again, the whole idea is we want to continue to create competition and to make sure that those guys understand that by saying ‘or’ that we need both.”

“Joe’s an older guy, he’s been around. He knows the system a little bit,” he said. “Joe’s a little more of a pocket passer, but he’s a lot more athletic than people give him credit for when he gets out of the pocket. We all know Braxton can make some plays on his feet if he has to scramble or step up.”

Center Mike Brewster will be counted on to make things as easy as possible for whomever is taking the snaps.

“I can’t do too much for them, but the thing I can do is make sure that they’re protected, make sure that I have the line all on the same page, make sure that I am picking up the blitzes with different calls and putting them in a position to be successful,” he said. “By doing that, I think it’ll make them feel more comfortable in the pocket, give them more time and let the receivers do what they need to do.”

Pryor took almost every snap the past two seasons. He led the Buckeyes to a Rose Bowl win two years ago and to a 12-1 mark last year, including a victory over Arkansas in the Sugar Bowl.

But he left Ohio State this summer, giving up his senior season, while caught up in the middle of the NCAA investigation into improper benefits to players. Tressel was forced out on May 30 after 10 years as the Buckeyes head coach, admitting he knew some of his players broke NCAA rules but didn’t tell anyone for more than nine months.

Fickell said the quarterbacks, like everyone else, would be graded on their performance against the Zips.

“Everything’s a test, we tell them,” he said.

Fickell also said that third-year sophomore Jaamal Berry has a hamstring injury and will probably not play in the opener. In his stead, the tailback rotation will be Jordan Hall, Carlos Hyde and Rod Smith.

Linebacker Etienne Sabino, who broke a bone in his hand 10 days ago, had surgery last week and is expected to play with a cast on his hand.

The two-deep roster that was unveiled featured seven new starters on offense and seven on defense, taking into account that the Buckeyes will be without three frontline players (wide receiver DeVier Posey, top tailback Dan Herron and offensive lineman Mike Adams) who are suspended for the first five games for taking cash and free tattoos.

Maybe because those top players will not be with the team for the start of the season (in addition backup defensive lineman Solomon Thomas is also sitting out the first five games, and backup linebacker Jordan Whiting will miss just the Akron game), Ohio State will go with game captains instead of seasonlong captains. Nominated for the Akron contest are Shugarts, Brewster and defensive lineman John Simon.

The 38-year-old Fickell said he was anxious to be a head coach after spending the last nine seasons on the Ohio State staff.

Tressel was known for his conservative game plan — repeatedly saying that the punt was the most important play in football — as well as his prep-school white shirt, tie and sweater vest.

Fickell was asked what he would be wearing on the sidelines in the opener.

“Whatever my wife lays out,” he said with a laugh.

CINCINNATI (AP) — In two games, the Cincinnati Reds have managed only one run and four hits off Philadelphia’s starters.... read more