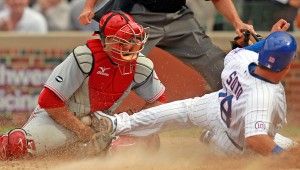 Cincinnati Reds catcher Devin Mesoraco, left, hangs on to the ball and tags out the Chicago Cubs' Geovany Soto, who tried to score from first base during the eighth inning at Wrigley Field in Chicago on Monday. The Cubs beat the Reds, 4-3. (MCT DIRECT PHOTOS)

CHICAGO (AP) — Though it’s hard to tell from Dontrelle Willis’ record that he’s enjoying a comeback season, he’s not letting the numbers keep him down.

In his 200th big-league start, Willis (0-5) was still looking for his first win since June 5, 2010. Despite holding Chicago to four runs and striking out eight, he still searching, largely because he walked five.

“I felt great,” Willis said. “I had a couple of mental lapses out there as far as pitch selection and it cost me. It’s just frustrating. It’s just one big inning cost us the game.”

The Reds haven’t given Willis more than three runs of support in any of his 11 starts this season, but it was the lefty’s loss of command that cost him on Monday.

“It’s just a situation where he just lost the strike zone, but then he got it back,” Reds manager Dusty Baker said. “They had the two-out rally, no one on base the next inning.”

Matt Garza (8-10) pitched effectively into the eighth and Aramis Ramirez had a tiebreaking two-run single for the Cubs. Carlos Marmol finished up for his 32nd save.

“Garza was fantastic,” Cubs manager Mike Quade said. “He pitched around a couple of mistakes. He hasn’t had many leads and he continues to pitch well.”

Drew Stubbs singled, walked and scored a run, and Yonder Alonso had two singles, a run and an RBI for the Reds.

With a game-time temperature of 62 degrees and a 21 mph wind howling in from center field, it was a day made for the pitchers, but Willis said the blustery conditions weren’t a factor.

“I just try to throw the ball over the plate and pitch my game,” Willis said. “Nothing changes with the elements and stuff like that.”

Willis has won just three of his last 38 starts, going back to 2008. The 2003 NL Rookie of the Year has been with three different teams since the start of last season but seems to have found a home in Cincinnati. He hasn’t allowed more than four earned runs in any of his 11 starts this season.

“I have another start in four days,” Willis said. “I try to keep battling and prevent the big inning. Hopefully I get a ’W’ out of it. You try to live and learn and stay positive for your teammates. I think that’s contagious for our ballclub.

“It’s frustrating because I’ve pitched worse and worn. But at the same token, I like the way me and (rookie catcher Devin) Mesoraco worked back there today.”

Willis retired the first nine Cubs in order, three by strikeout. He threw just 29 pitches in his first three innings, 24 for strikes.

The left-hander lost track of the strike zone in the fourth, walking the bases full. Soriano tied the score with a first-pitch single to left but Willis recovered to leave the bases loaded.

“He had great command of the strike zone until that inning, then just lost it in that one inning,” Baker said. “Fortunately for us, they only got the one run out of it but then they had the (three)-run rally with the possible windblown ball that could have been caught in left.”

He got two quick outs in the fifth, but five straight Cubs hitters reached as they scored three runs. Castro singled with two outs. Willis could have escaped the inning, but Alonso couldn’t track down Reed Johnson’s high fly ball into the swirling wind in left. The ball stuck in the ivy, sending Castro back to third. Ramirez then lined a single to left, putting the Cubs up 3-1.

Two batters later, Willis threw a wild pitch with the bases loaded, driving in Ramirez and capping the Cubs’ rally.

It was another tough loss for Willis, but he’s keeping his chin up.

“This was my 200th big-league start, so I’m happy to have that longevity,” Willis said. “I’m going to continue to battle and fight and hopefully I’ll get won and then they’ll come in bunches.”

NOTES: Mesoraco made his first big-league start as Willis’ battery mate. The pair worked together at Triple-A Louisville, where Willis went 5-2 earlier this season. Baker said Mesoraco will also start on Tuesday. The area around Bronson Arroyo’s left knee was wrapped and the righty walked with a slight limp before Monday’s game, but Baker said he expected Arroyo to make his next start. Arroyo was hit in the fleshy area above the knee by a Rafael Furcal liner drive on Sunday. Mike Leake starts on Tuesday for Cincinnati against the Cubs’ Rodrigo Lopez. Leake leads the Reds with 11 wins on the season.