Arrest made in bomb threat 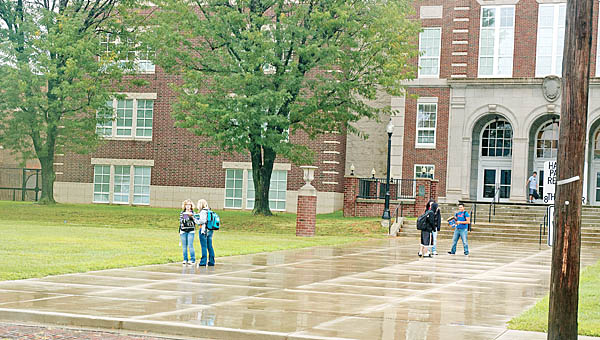 A few students wait in front of Ironton High School Tuesday morning for rides home after the school was shut down because of a bomb threat.

The boy, who officials did not name because of his age, was arrested around 7:30 p.m. Tuesday and taken to a group home. He is charged with tampering with evidence and inducing panic, Carey said.

School officials received the threat around 7:49 a.m. Tuesday. All of the schools were emptied at 11 a.m. following the threat.

“We take every threat seriously and we thought there may be some validity to this one. So we evacuated the school,” Superintendent Dean Nance said.

No explosives were found.

A few students wait in front of Ironton High School Tuesday morning for rides home after the school was shut down because of a bomb threat.

Carey said AT&T gave officials the phone number that the call originated from. The FBI in Portsmouth was able to trace the number to a cell phone in Louisiana. FBI officials in Louisiana were ultimately able to link the phone to the student, Carey said.

“When someone does that there is the potential to being caught,” the police chief said. Carey commended Nance for making the call to dismiss school early. The school district staff and the law enforcement agencies worked well together to handle the situation, Carey said.

“I was rather impressed,” he said.

CHESAPEAKE — The Chesapeake school board took the first steps to putting in a new athletic complex. But not before... read more