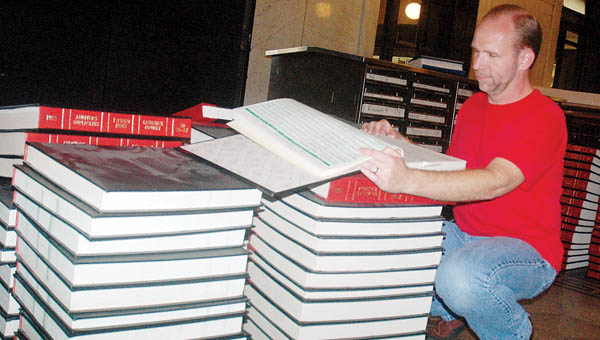 Currently the auditor’s office is in the process of temporarily relocating from its second floor office because of dampness caused by an aging air conditioning system.

Right now, the county doesn’t knows for sure how much money will come into its coffers for next year.

Currently the auditor’s office is in the process of temporarily relocating from its second floor office because of dampness caused by an aging air conditioning system.

Deputy auditor Chris Kline anticipates that revenue will be certified in the next few weeks.

But already the county commissioners are hearing officeholders’ wish lists as they receive budget requests and start conducting hearings for 2012.

The only officeholder to show up for Tuesday’s hearing was County Recorder Sharon Gosett Hager, who is seeking a four percent increase in her upcoming budget.

“I tried to be frugal,” Hager told Commissioners Les Boggs and Bill Pratt. Paul Herrell was not at the hearing.

“I put in for supplies less than what you gave me last year,” she said.

The recorder put in for $1,000 less in supplies and $1,600 less in equipment but put in more for salaries for her staff. That money would mainly go to keep a part-time Ohio University Southern student in the office.

“And it would allow me extra in case I could give raises,” she said.

Also Hager doesn’t plan to make withdrawals from her special fees account, set up for equipment.

“My computer system is five years old. I expect to keep using it, but I need to start saving up (for a new system later),” she said.

So far the commissioners have received $1.95 million in additional requests from officeholders for their budgets next year. The commissioners know the county will be missing almost $300,000 from a reduction from the state’s Local Government Fund.

“We have less money and two million more in requests,” Boggs said.

“We are doing what we can. We will talk to each individual officeholder who comes up. We are going to be as frugal as possible with the taxpayers’ money.

“When it is budget time it is always difficult. Commissioners are paid to make tough decisions. That is what we are going to do. We can’t please everybody. If we can get a budget that is viable, then we will make it work together.”

At their Sept. 1 meeting, Pratt threw his support to adding to the sheriff’s office budget this year. The commissioner would like to add four road deputies over the next two budgets, bringing staffing to 50. Pratt also wants to replace three cruisers a year for the next six years.

Recently Sheriff Jeff Lawless submitted a budget proposal that would increase his portion of the county’s general fund from $2,294,654 to $3,341,459 or a 46 percent increase.

Lawless would also like to add two weight enforcement officers at a total salary of $72,000, excluding cost for insurance and retirement benefits.

“We need to get our revenue (figures),” Pratt said. “If it is increased, the cuts may not be as much. (If not) we can start with what everyone got last year. We can stay with last year and then cut.”

Mayor: Bridge may be on schedule

The new Ironton-Russell Bridge will likely go to bid on time or within a few weeks of the previously set... read more