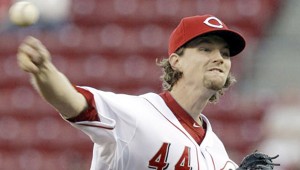 CINCINNATI — Mike Leake can look forward to next year thinking about how well he ended this season.

Leake (12-9) made the majors right out of Arizona State and this is just his second season working out of a five-man rotation. The Reds thought it best to limit his innings and do not plan to pitch him again this year.

He finished with 175 innings, with all but seven in the major leagues. He is the Reds’ leader in wins and strikeouts.

“I’d like to finish the year but I understand,” Leake said. “The want to protect me and protect themselves.”

Leake allowed one run on six hits and two walks and struck out two.

Leake pitched a career-high nine innings in his previous start, giving up three hits against the Cubs at Wrigley Field. He took a one-hit shutout into the ninth in that game before giving up Starlin Castro’s two-out infield single and pinch-hitter Bryan LaHair’s tying home run.

“We wanted him to have one more start after that tough ending last time,” manager Dusty Baker said. “He’s matured a lot as a pitcher and a person. He reads bats well, fields his position and is an all-around player. We will limit him to pinch-running and in dire circumstances pinch-hitting.”

Leake was happy with his season, even with a brief demotion to Triple-A Louisville.

“It was a good learning year. It was nice to go down for a couple weeks and prove I belong,” Leake said.

Phillips homered for the third time in two games. He has 15 home runs this year.

Francisco Cordero pitched the ninth for his 33rd save.

The Cubs saw their three-game winning streak come to an end while wasting a solid pitching performance by Ryan Dempster (10-12). He allowed two runs and six hits, striking out eight in seven innings.

“That was fun,” Dempster said.

After combining for 27 hits, including seven home runs, and 20 runs in Monday’s 12-8 Chicago win, the Reds and Cubs produced a total of 12 hits and three runs with one homer on Tuesday.

Phillips connected in the bottom of the first for his third home run in four at-bats over the last two games.

The Reds made it 2-0 in the fifth. Devin Mesoraco drew a leadoff walk, Leake grounded into a forceout, Phillips walked and Edgar Renteria hit an RBI single. Renteria had three hits.

Carlos Pena led off the Cubs sixth with a double. He moved to third on LaHair’s soft single to left-center field and scored on Alfonso Soriano’s double-play grounder.

NOTES: Castro walked to lead off the game for the second consecutive night. He has reached base at least once in 26 consecutive games. … LaHair extended his career-opening hitting streak to eight games. … Reds RHP Johnny Cueto, Cincinnati’s scheduled starter on Wednesday, trails Los Angeles LHP Clayton Kershaw in the NL ERA race by .0044 percentage points. Cueto has gone four starts without a decision, including two blown saves. … Chicago’s scheduled starter, RHP Casey Coleman, hasn’t won in nine appearances, including seven starts, since May 19 at Florida. He is 0-4 in the span.

The Associated Press CORAL GABLES, Fla. — When they met to decide the national championship nearly a decade ago, Miami... read more