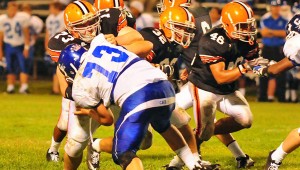 With the Ashland Tomcats, teams always brace for their wide-open spread offense.

But Ironton coach Bob Lutz said there is equal concern about the Tomcats’ defense.

The only blemish is an 18-14 loss to West Virginia Class 3-A power George Washington.

“They can put a lot of points on the scoreboard, but the thing that gets overlooked is their defense,” said Lutz. “Teams have had trouble moving the ball against them. Russell had problems last week.”

“They’re pretty quick defensively and they’re aggressive. They’ve got enough size to play tough with you up front and they’ve got a lot of experience and skill in their secondary,” said Lutz who owns a 29-5 record against the Tomcats during his coaching career.

“It’s a pretty good front and they have good linebackers,” said Lutz.

But teams must prepare for the Ashland offense led by three-year starter Sam Hunter (6-0, 175) at quarterback.

The Tomcats — ranked 13th in the Class 4-A poll — have a plethora of receivers. Codey Withrow (6-3, 180) has more than a dozen catches for almost 200 yards and two touchdowns. Richard Ford ((5-10,170) has 10 grabs and two touchdowns to his credit while Malik Massey (5-5, 160) also had eight grabs and a score. Whetsel and Prichard complete the group of wide receivers.

“They’ve got a lot of weapons and an experienced quarterback who’s been in a lot of different situations the past two years,” said Lutz. “We’ll have our hands full.”