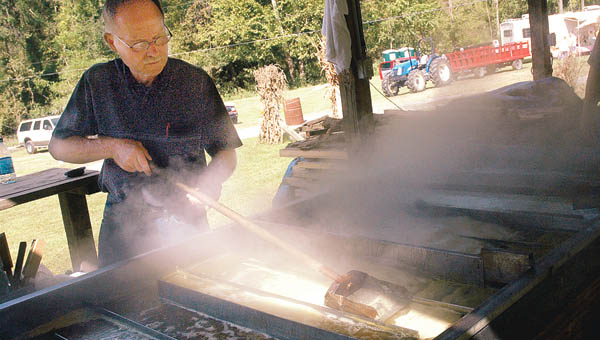 SOUTH POINT — Marty Painter helps herself to a taste of sorghum Saturday morning at the festival named in honor of the syrup.

Each year for the past or five years, the Culloden, W.Va., resident said she has been making the trip to the Willow Creek Sorghum and Bluegrass Festival in South Point. country great. Not many people do this anymore. It’s a shame what young people are going to miss out on.”

This is the 13th year for the annual sorghum festival, which is held on Willow Creek Road. Each year, Wayne County, W.Va. native Lowell Moon makes sure that festival-goers don’t miss out on that tradition. He cooks the sorghum from a juice into a sweet molasses. Moon said his father made sorghum for years and passed the tradition on to him.

“This was the only sugar treat we had when I was a kid,” he said.

Moon has been making sorghum on his own for the past 13 years, he said.

“We’d like to keep the mission going,” he said. “Just to teach the young people how it was done in the old days.”

Friends Bill Enyart and Ivan Smith host the festival. Besides sorghum, the festival offered music and food. The co-founders said the goal of the festival is fellowship, not money. They don’t charge an admission fee but make enough from vendors to cover expenses, Enyart said.

“We like to think of it as a community event,” he said. “We bring people together… We’re not in this for profit. If we were, we’d be doing something else.”

Enyart said each year the festival draws a crowd.

“No matter what’s going on in the Tri-State, it seems like we always have our people,” he said.

COAL GROVE — For the 10th anniversary of 9/11, some Dawson-Bryant High School seniors were able to remember that day... read more