Bobcats prove too much for Marshall 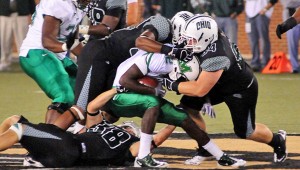 ATHENS — With three interceptions in the first quarter, the Marshall Thundering Herd felt fortunate to be down only 10-7.

Then came the rest of the game.

The Ohio Bobcats used a powerful running game and a strong defense that force six turnovers in a 44-7 romp of the Herd on Saturday night at Peden Stadium in the “Battle for the Bell.”

“No question. You turn the ball over six times inteh first half you can’t win,” said Marshall head coach Doc Holliday after his team fell behind 34-7 at the break.

“We turned the ball over and we didn’t stop them on defense. We had a lot of issues.”

Ohio racked up 271 yards on the ground as Ryan Boykin ran 25 times for 130 yards to lead the offense.

Tettleton threw a 2-yard touchdown pass to LaVon Brazill for a 7-0 lead.

Cato hit Aaron Dobson on a 45-yard TD pass to tie the game, but then Ohio ran off 37 unansered points.

Things get tougher for the Herd as they host 13th-ranked Virginia Tech on Saturday.