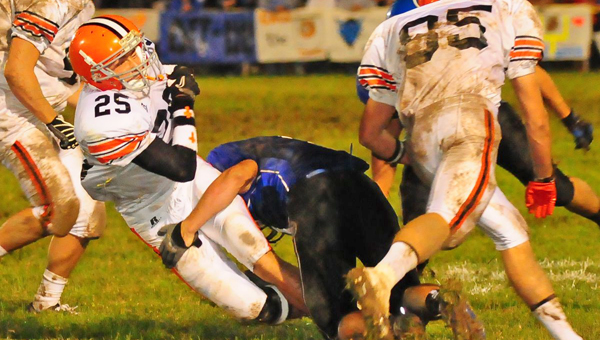 GALLIPOLIS — The wait was worth it for Dion Brown.

After missing the past two and a half seasons with injuries, Brown finally got in a varsity game and quickly made up for lost time.

Brown ran 73 yards for a touchdown with 8:33 left for the game’s only score as the Ironton Fighting Tigers blanked the Gallipolis Blue Devils 6-0 on a muddy field Friday night.

“He’s a big-play threat any time he touches the ball. It’s nice to have him in there,” said Ironton coach Bob Lutz.

“We needed it. We didn’t play very well. We didn’t have much intensity and it showed. We blocked the wrong people or we just didn’t block anyone the whole night.”

Brown — who suffered a cracked collarbone in the preseason — also had a catch for 44 yards that helped put Ironton in scoring position only to have the drive stall at the 24.

In fact, Ironton had 322 yards of offense but had trouble finishing drives the entire evening due to missed blocks, a fumble and two interceptions. The Fighting Tigers had drives stall or end in at the Gallipolis 24, 7, 33, 9, 16 and 8-yard lines.

The fumble actually came when Bryant Bokovitz came through untouched and took the ball from Ironton quarterback Tyler Kratzenberg at the 16.

“We can’t keep moving the ball up and down the field and come up empty. It hurt us last week and it almost got us again. We’ve got to be able to finish our drives,” said Lutz.

With the game scoreless in the fourth quarter, Ironton (4-1) was backed up on the 7-yard line following a Gallipolis punt. Trevor White ran 20 yards on first down and Brown scored on the next play.

Gallipolis (3-2) then began a drive at its own 35 and 13 plays later was starring at fourth and goal at the 2-yard line. But White sacked quarterback Wade Jarrell at the 10-yard line with 1:08 left and Ironton ran out the clock for the win.

“That was a big play. Our defense did a pretty good job but we weren’t scoring on the other end. But give Gallipolis credit. They played well and their running back runs hard,” said Lutz.

Brown finished with 75 yards on four carries in his first game of the season. Tyler Hager ran 13 times for 61 yards as Ironton rushed for 160 yards. Quarterback Tyler Kratzenberg was 7 of 12 for 154 yards but had the two picks.

Justin Taylor ran 27 times for 147 yards for the Blue Devils who finished with 146 yards rushing and 69 passing for a 215 total.

On the Gallipolis drive to the 2-yard line, Taylor moved to tailback and Zack Taylor was inserted at fullback. Taylor carried 11 of the 14 plays. Jarrell was 2-2 for 14 yards including a 10-yarder to Justin Bailey on a third down and 4 at the Ironton 34 to keep the drive alive.

Ironton begins a tough stretch over the next three weeks with a trip to Jonathan Alder next Friday followed by Jackson at home and a road game at defending state champion Bishop Hartley.