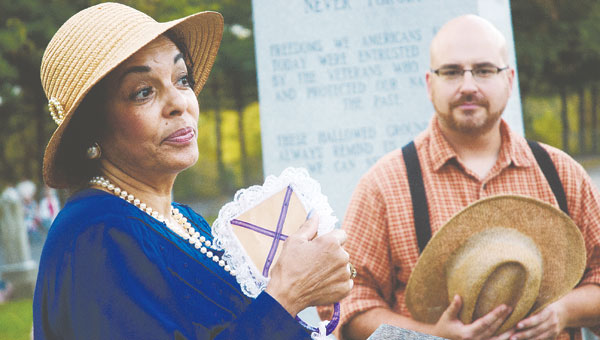 Jackie Dufore, left, and Chris Saunders, right, play the part of Levinda and James Ditcher telling their story of helping hundreds of slaves through the Underground Railroad during the annual Historic Ghost Walk Saturday at Woodland Cemetery.

Cemeteries are, by design, hushed places, where voices are lowered and the atmosphere is one of quiet reflection. But on Saturday evening, Woodland Cemetery came to life, sort of, if only for a few hours.

The Lawrence County Historical Society presented its annual Ghost Walk. The event began at 6 p.m. and at 6 p.m. there was a thick stream of people walking from the Liebert Corp. parking lot through the cemetery gates and hundreds more riding several shuttle buses to hear the stories of some of Lawrence County’s more illustrious forebears from historical society volunteers dressed in period costume.

Many of the stories told were compelling and educational if not at first familiar to some ghost walkers.

Ray and Julia Jones played the parts of Charles and Harriet Kingsbury. He was the first superintendent of the Ironton City Schools; she was in the first graduating class at Ironton High School.

Gail Webb played the part of Martha Ellen Bloxon Johnson, the woman for whom the Civil War-era song “Lorena” was written. Johnson’s story was hardly romantic in spite of the lyrics of the song.

She had to spurn the marriage proposal of the man she loved because her family though the young minister was too poor.

That man went on the write the famous song.

Webb told her story and sang the song. Afterward, musician Michael Garvin played the song on his violin.

Duke Sheridan and Theresa Bond told the story of George Bay and his wife, Mary. George Bay was a riverboat operator in the early days of Lawrence County history. 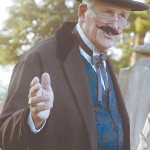 Some of the stories, though true, had a tinge of the supernatural attached to them. Ironmaster and bank president William Means is buried near a gigantic cross that is said to have fallen while being erected; one worker was killed in the accident and is said to haunt the cemetery.

The story of ballerina Antoinette Sherpatoska Peters was told by Yvonne DeKay, who, fittingly, owns a dance studio.

The Peters story is one of a woman who did not rest in peace. Her grave was robbed and expensive jewelry given to her by a Russian Czar was stolen. Peters’ fingers were hacked off to get the jewels. As DeKay told the story of the Russian dancer who became a local industrialist’s wife, girls dressed in dance costumes twirled around the Peters tomb.

Jean McMahon, of Ironton, and Rita Baker, of Rio Grande, were among the scores of people who attended the ghost walk. Baker had been to the ghost walk before but McMahon had not.

“I know the people at the historical society have worked very hard on this,” McMahon said.

Ashley Adkins attempts to match up fingerprints during a forensic science class taught at Dawson-Bryant High School. This is the... read more