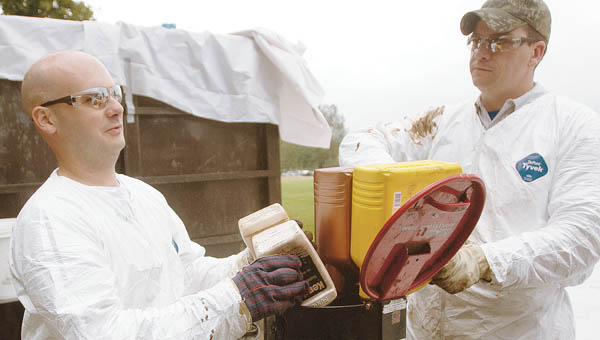 HAVERHILL — Lawrence-Scioto Solid Waste Management District officials knew the household hazardous waste collection event Saturday would be large — after all, they started 20 minutes early because the cars were already lined up at the Dow Chemical plant entrance gates.

By the time the event was over at 1 p.m. Saturday, 322 vehicles had wound their way through the collection drop off area — slightly less than 80 cars an hour.

Not only was the car tally an increase over last year, but the tally for everything else was, too.

“That’s more than double (last year),” Palmer said. “I think people are becoming more aware of what we’re doing. And the district is happy to provide this, free of charge and we want to encourage people to participate.”

“This is a great way for people to dispose of medication in a safe manner. It was incinerated yesterday. This ensures the medication didn’t end up in the wrong hands or flushed down a toilet and eventually in our waterways,” Lawless said.

Of the 322 cars that participated, 190 were from Lawrence County. Of the 190 Lawrence County participants, 90 were from Ironton, 19 from Proctorville, 16 from Chesapeake, 5 from Coal Grove, 4 from Deering, 17 from Kitts Hill, 5 from Pedro, 26 from South Point, 4 from Willow Wood and 2 each from Wilgus and Waterloo.

“People keep asking me if we’re going to do this again,” Palmer said. “And the answer is yes, we are. We’re definitely having this (collection event) again next year.”

This past spring, a county-wide prescription drug takeback netted 100 pounds of unwanted pills. Officials were surprised then, when another... read more