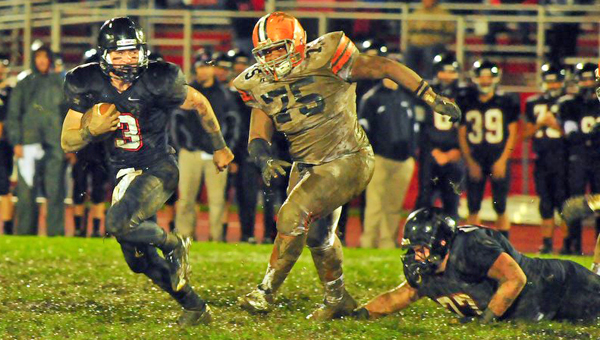 A muddy field and steady rain kept things soggy, but the Jonathan Alder Pioneers managed to get a pair of third quarter touchdown runs by Derritt Potts to beat the Ironton Fighting Tigers 17-0 on Friday night.

“It was hard to get any kind of traction,” said Ironton coach Bob Lutz.

“The last two weeks we haven’t been able to utilize our speed, but they were playing on the same field as we were. They made a couple of plays and we didn’t and that’s the difference.”

Potts went 13 yards to cap a 49-yard, 9-play drive to start the second half and snap a scoreless tie. The drive was set up by Nick Squires’ 31-yard kickoff return to the Ironton 49.

Ironton (4-2) used a kickoff return by Dion Brown to reach the Alder 47, but the drive quickly stalled and Ironton was forced to punt.

Alder (6-0) got the ball at its own 14 and it took just three plays to score as Potts found the hole closed inside, cut to his left and found a seem in the defense and raced 65 yards for the touchdown to make it 14-0 with 4:38 on the clock.

Patrick Lewis ran back the kickoff to the Pioneers’ 30 and the Fighting Tigers got to the 20 three plays later. But quarterback Tyler Kratzenberg had the ball slip out of his hand trying to pass and Alder recovered to end the threat.

Smith kicked a 32-yard field goal with 7:45 to play to cap the scoring.

“We didn’t have many penalties and we only had one fumble, but they always came at the wrong time and put us in a deep hole. It’s hard to overcome those kind of things under these conditions.”

The Pioneers controlled the ball in the fourth quarter. Ironton ran only four plays and had just 36 for the game.

Each team had a minor threat in the first half.

The Fighting Tigers moved from their own 46 to the Alder 31, but a holding penalty on a second and 7 moved the ball back 15 yards and forced a third down pass that saw Kratzenberg slip and fall for a 1-yard loss.

The closest thing Alder came to a score was on the final play of the half when Smith had a 49-yard field goal attempt fall short.

Panthers control clock to down Redmen in OVC

Chesapeake Panthers’ running back Brandon Noble (2) finds a hole in the Rock Hill defense as he gets a big... read more