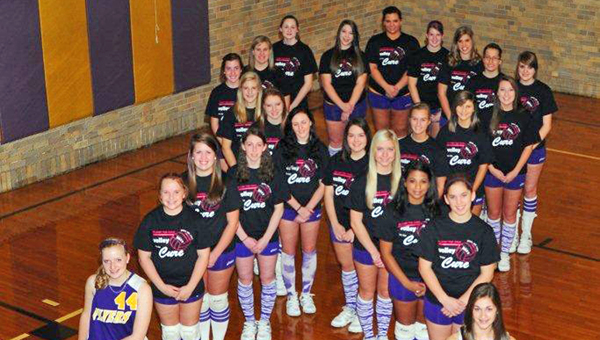 Members of the Ironton St. Joseph Female Flyers’ volleyball team form the shape of a ribbon to signify the logo of the Susan G Komen Cancer Foundation campaign. The Female Flyers will conduct a “Volley for the Cure” game on Wednesday against Sciotoville East. Doors open at 4:30 p.m. and the game is at 5:30. Admission is $5 and “Volley for the Cure” t-shirts will be on sale for $10. All proceeds will go to the Susan G Komen fund. (The Ironton Tribune / Kent Sanborn of Southern Ohio Sports Photos)

When the St. Joseph Female Flyers talk about Pink, they’re not talking about the stage name of singer Alecia Beth Moore.

The Female Flyers will look to pack the St. Joseph High School gym not only with pink but green as well as they look to raise money for the Susan G Komen Cancer Foundation.

A “Volley for the Cure” volleyball game will be held Wednesday at the school as the Female Flyers face Sciotoville East. The game is at 5:30 p.m. with doors opening at 4:30.

Money raised at the game will be donated to the Komen Foundation to help in the education of awareness for breast cancer and its early detection. Admission is $5 and T-shirts will be sold for $10.

A moment of silence will be held prior to the game to honor those who have battled or are battling cancer in any form. A special prayer will be led by the Female Flyers’ team in honor of Natalie Wilson, a former teammate and sophomore at St. Joseph who was just recently diagnosed with leukemia.

Pink carnations will be presented to survivors and patients.

Fans are encourage to wear pink — T-shirts being sold will be pink. There will be a bake sale, a split-the-pot, a donation jar and several raffles throughout the night.

CINCINNATI (AP) — The Bills’ stretch of amazing comebacks ended when they couldn’t stop a rookie quarterback from pulling off... read more