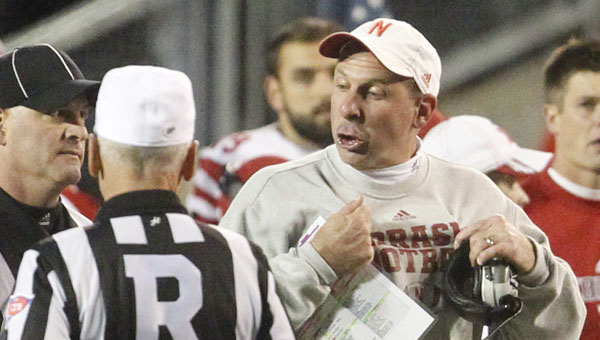 Nebraska head football coach Bo Pelini, right, will be facing his alma mater for the first time in his coaching career when the Cornhuskers host the Ohio State Buckeyes at 8 p.m. on Saturday. (The Ironton Tribune / MCT Direct Photos)

“A lot of tough love. No excuses. Get it done. Old-school football. That’s Bo,” said Jim Peel, who played with Pelini in the Buckeyes’ secondary from 1987-90.

Pelini will coach against his alma mater for the first time Saturday night when the Buckeyes visit Memorial Stadium. True to his nature, he downplays the significance.

“It isn’t more or less meaningful. It’s about doing a job,” Pelini said. “I want our team to be better and to walk off the field Saturday night a better football team than we were when we started this week.”

Pelini isn’t one to wear his loyalty to Ohio State on his sleeve. He said he enjoyed his time there, and what’s done is done.

Pelini played free safety and Peel strong safety. The two catch up with each other every few months during the offseason.

Peel, who lives in the Cleveland area, last saw his teammate at Pelini’s golf outing this summer. Peel said he didn’t ask Pelini directly about the Buckeyes’ game against Nebraska.

“I didn’t want to put him on the spot,” Peel said.

Peel said he thinks Pelini is more sentimental about Saturday than he lets on, though he understands why Pelini doesn’t want that to be a distraction as his team tries to rebound from a devastating loss to Wisconsin.

“But you’re coming back for your Big Ten home opener against your alma mater, a marquee school,” Peel said. “He’s an Ohio guy. Deep down inside, it’ll be a pretty special game for him.”

Pelini played at Ohio State during a down cycle for the program, though the times weren’t as tumultuous as now with all its NCAA entanglements. The Buckeyes were 25-18-3 over his four years, never finished higher than a tie for third in the Big Ten and went to two bowls.

Earle Bruce coached Pelini before he was fired after the 1987 season and replaced by John Cooper. Bruce remembers old No. 48 for his advanced acumen for the game, especially defense, and his insatiable desire to hit opposing players.

“He came out of Youngstown, which at that time was breeding tough kids, and he was one of those,” Bruce said. “He was no dummy. He caught on very quickly to all the schemes so he could play as a freshman — except for the fact we had a couple really good football players at that time at corner and safety and he had to wait his turn.”

Pelini was the starting free safety his last two years and was a team captain as a senior.

Off the field, Peel said, Pelini would challenge coaches during film study and ask why a particular scheme was used against a formation or tendency.

Asked to imagine what it would be like for him to play for himself as coach, Pelini laughed and said, “There would be a lot of arguments. As a player I thought I knew everything.”

As a captain, Pelini showed what he would become as a coach.

“He demanded that people compete, never give up and play hard,” Peel said. “If you weren’t, he’d let you know. But people respected him. When he spoke to the team it was always from the heart.”

Pelini was no star. He just didn’t make many mistakes. His given name, Mark Pelini, appears once in the record book, for number of interceptions in a bowl game. He had two in a loss to Auburn in the 1989 Hall of Fame Bowl.

Pelini said the most enduring memories from his playing days are the 27-26, last-second win at sixth-ranked Iowa in 1990 and all four of his games against rival Michigan. Pelini lost his final three games against the Wolverines, including a 16-13 heartbreaker his senior year that was decided by a field goal as time ran out and cost the Buckeyes a trip to the Rose Bowl.

That led to Pelini’s final game as a player, a 23-11 upset loss to Air Force in the Liberty Bowl.

“He did the right things, moved to the right places,” Bruce said. “Naturally, where he was, there was success. He added to that success with the way he coached, the way he teaches. He put a good defense out there every time. That’s why he is where he is. He earned it.”