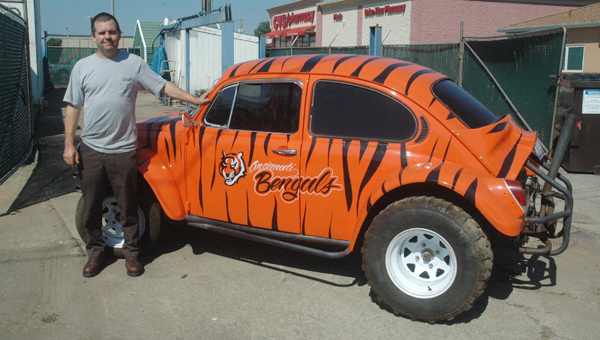 Morrison — who operates Gold Street Muffler and Automotive Repair in Ironton — took his love of the Bengals an extra yard or two as he an a friend modified a Volkswagon bug into a Bengls’ fan car.

“We pulled it out of a building and got carried away with it,” said Morrison.

The car was orange but they gave it another coat of paint. Morrison’s friend Darren Allen painted a Bengals’ tiger head and the “Cincinnati Bengals” name on the doors. They took vinyl and cut out tiger stripes and taped them to the car.

“We worked on it for about a month in our spare time,” said Morrison.

Morrison and his friends attend Bengal game and they have seen some of the different designs on other vehicles while tailgating.

“I’ve been to a lot of Bengal games and there’s nothing there that looks better than this,” said Morrison. “Some of the guys want me to change it and put Ironton Tigers on it. We may do that for Ironton games and switch back for Bengal games. We’ll work something out.”

Morrison added fenders he got in a kit from Las Vegas. He also added the tree knockers and rear cage over the engine.

“We plan to put it on a trailer and take it to Cincinnati and meet some friends and then drive the car to the game,” said Morrison.

While the car looks good and run well, Morrison said there is a drawback.

Although he said there would be no problem driving the car to Cincinnati for a game, he prefers to ride in another means of transportation and just load the Volkswagon on a car trailer.

“No matter what you do to it, it’s still a Volkswagon,” Morrison said with a chuckle. “It’s not very comfortable.”