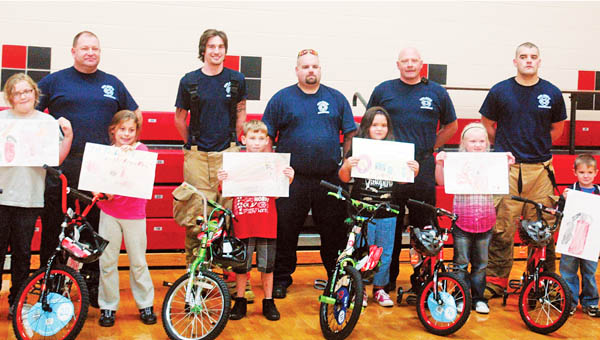 The Coal Grove Volunteer Fire Department presented a fire safety assembly at Dawson-Bryant Elementary to 500 students. The primary purpose was to educate students how they could keep themselves and their families out of danger.

“I hope (the kids) take something home to their families and keep everyone safe,” assistant chief Chad Kelly said.

To start the demonstration, Chief Gary Sherman said two things are most important in a fire: get out of the house and get to a neighbor’s house to call 911. He asked the students if they knew their home address. The students said yes. He said that’s the next important because one has to tell the 911 dispatcher where to go.

Sherman then asked what the best way to get out of a house when a house is on fire. Students answered “the front door” or “by a window”. Sherman then said the answer he was looking for crawling on the floor. He said crawling is the best option because smoke and flames tend to stay higher in the air. Getting into a crawling position allows the individual to breathe unpolluted air.

Next, firefighters David Skaggs and Dane Haukedahl showed they to put on a firefighter’s equipment while Kelly explained what each piece was for. First the men put on their jackets and pants. Kelly said the garments could withstand temperatures up to 1,500 degrees Fahrenheit.

Kelly then showed the fire extinguisher. To operate, one pulls the pin out front the tops and pulls the trigger to put out the fire. The trigger wasn’t actually pulled despite encouragement to the contrary from students.

Another component of a fireman’s arsenal is an oxygen tank. Kelly demonstrated a whistle that sounds from the tank. If a firefighter doesn’t hear that noise, the tank is not safe to use.

Faculty were pleased the firefighters came.

“I appreciate (the fire department’s) collaboration and the kids get to meet their local heroes,” Angie Dillow, school principal said,

The school had a poster contest where all the students drew something related to fire safety. Teachers chose one out of each class to win a bicycle donated from local businesses. The winners are: kindergarten Derreck Sesher, first grade: Kelsey Fraly, second grade Katie Gonzalez, third grade Morgan Schultz, fourth grade Kaesie Gwilliams and fifth grade Maddy Watson.

The Coal Grove Volunteer Fire Department will have its fourth annual public safety day Saturday. There will be an inflatable fire truck and models painted to look like it’s on fire.

Buckeyes know first trip to Nebraska will be loud