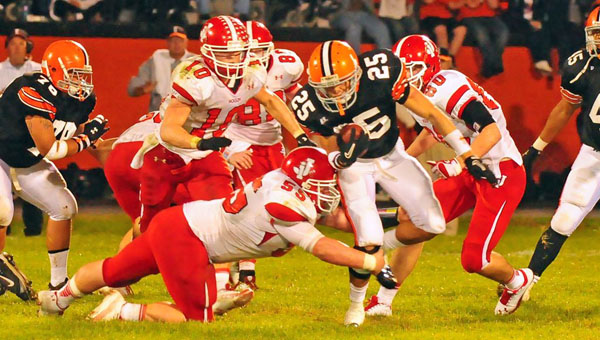 Ironton Fighting Tigers’ running back Dion Brown (25) slips through the Jackson defense to pick up some yardage. Brown ran for 76 yards but Ironton lost 28-22 as unbeaten Jackson rallied with two minutes to play. (The Ironton Tribune / Tony Shotsky of Southern Ohio Sports Photos.com)

There were 84 running plays and 22 passes in Friday’s game, but the play that stood out the most was a punt return.

A key punt return just before halftime helped key Jackson’s comeback as the Ironmen rallied to edge the Ironton Fighting Tigers 28-22 on Friday.

Ironton was leading 16-7 with less than a minute to play in the first half. Faced with a fourth down, the Fighting Tigers punted and Jackson’s Austin Osborne returned the kick 33 yards to the Ironton 47.

With 12 seconds on the clock, Osborne threw a pass into the end zone and Ty McNelly out-jumped Ironton’s Tyler Kratzenberg to make the catch and get the touchdown to pull Jackson within 16-14 at the half.

“To me, the punt return was the key play, not the touchdown,” said Ironton coach Bob Lutz. “We didn’t get down the field and cover the kick. If we do our job, the point is moot.”

Hager’s run came on a fourth down.

But Jackson (7-0) answered with a 70-yard, 7-play drive that culminated on a 26-yard scoring run by Drew Irvin with two minutes to play.

Ironton wasn’t about to quit.

Starting at their own 27 following the kickoff, Kratzenberg threw to Dion Brown for a 6-yard gain and Hager ran for 3 more. Kratzenberg and Brown teamed up again for a 14-yard pickup and a new set of downs.

Michael Lawless caught a pass for 5 yards but the next pass went incomplete. Hager was stopped for no gain to set up a fourth down play.

Kratzenberg rolled to his right and threw for a wide-open Lawless who appeared to be hit before the ball arrived causing the Ironton receiver to drop the ball and Jackson took over with 52 seconds left.

Jackson went up 7-0 in the first quarter on a 1-yard run by Osborne.

Following an interception by linebacker Cody Roberts, Ironton used a 48-yard pass to Lawless to set up a 2-yard TD run by Hager and Kratzenberg’s conversion pass to Lawless put Ironton up 8-7 with 7:52 left in the half.

The Fighting Tigers forced a punt and then got a 70-yard run by Brown to the Jackson 15 where Hager scored on the next play. Trevor White ran for the conversion and it was 16-7.

But then came the punt return that Jackson back in the game with only seven seconds left in the half.

“We had the momentum and then we let them back in the game and gave them some confidence,” said Lutz.

Jackson took the second half kickoff and went 65 yards in 13 plays capped by McNelly’s 5-yard run and it was now 21-16.