Bengals rally late to get win over Jaguars 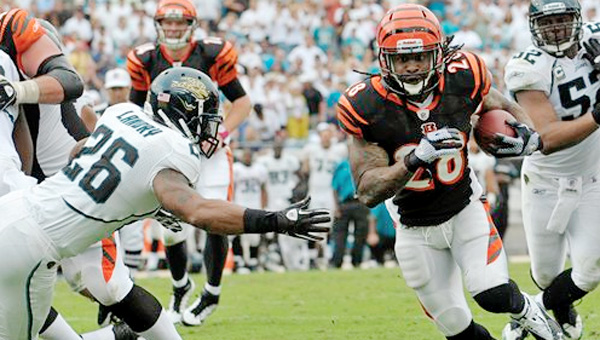 Cincinnati running back Bernard Scott (28) scored a late touchdown to give the Bengals a 23-20 lead. The Bengals went on to beat the Jacksonville Jaguars 30-20. (The Ironton Tribune / Courtesy of The Cincinnati Bengals)

Sure, it was a great feeling to win in his return to Jacksonville. Nelson had another reason to celebrate: the come-from-behind victory got him off the hook.

The Bengals (3-2) took advantage of Matt Turk’s 22-yard punt into the wind to set up the winning score, a touchdown that was needed because Mike Nugent missed an extra point in the first half and because Nelson blew coverage on a 74-yard touchdown pass in the fourth.

“I’ve had a lot of success on this field and had some good wins here, so it was nice to continue that trend,” Nelson said. “Bottom line, it’s a W. A win is a win, even if we did make some mistakes out there.”

Cincinnati’s mistakes were overshadowed by Jacksonville’s gaffes, which resulted in a fourth consecutive loss and more questions about coach Jack Del Rio’s future with the franchise.

“At the end of the day, he’s not playing,” Jaguars running back Maurice Jones-Drew said. “If somebody has to go, obviously it’s going to be one of the players. You can call whatever you want, we have to execute the play. It’s not on the coach. It’s sad to say that he has to take the heat, but he shouldn’t because he’s not out there strapping it up, going out there to play. All he can do is sit and watch.

“It ain’t on him. He’s not wearing a jersey number.”

The Jaguars (1-4) had plenty of blame to go around.

Tight end Marcedes Lewis had a pass stripped from his hands in the end zone in the second quarter, and the Jaguars had to settle for a short field goal. Mike Thomas and Jason Hill dropped balls. Rookie quarterback Blaine Gabbert failed to handle a botched snap in closing minutes, denying Jacksonville a chance to tie the game with a field goal. And then there was Turk.

“It’s not going in our favor,” Thomas said. “A couple of things happened down the stretch and y’all know the end result.”

The Bengals came up big down the stretch, something that eluded them in close losses to Denver and San Francisco earlier this season.

After Turk’s punt bounced out of bounds, Dalton hooked up with Jermaine Gresham on a fourth-and-6 play to keep the drive alive. He then found Andre Caldwell for an 8-yard gain, and with the Jaguars expecting a pass on third down, Scott weaved his way into the end zone to make it 23-20.

“The more experience I have going out and seeing different looks, I feel like I’m becoming comfortable,” Dalton said. “Definitely getting easier.”

Dalton completed 21 of 33 passes for 179 yards. He was sacked twice and threw an interception. Cedric Benson ran 24 times for 53 yards. A.J. Green caught five passes for 90 yards and a score.

Jacksonville had a chance to tie, but Gabbert fumbled an early snap from Brad Meester, and the Bengals ended up with the ball. Cincinnati also scored on a wacky fumble return on the final play.

“Pretty crappy feeling right now,” Del Rio said. “Simply not acceptable on a lot of fronts. Just put it on my shoulders. I’m not doing enough. We can’t have breakdowns like that at the end of the game. … It’s unacceptable.”

The Jaguars have lost seven of eight dating to last season.

Jacksonville looked as if it might snap its losing streak when Gabbert found Jason Hill running alone behind Cincy’s secondary.

Gabbert got Nelson to bite and hit Hill in stride for the 74-yarder with about eight minutes remaining. But nothing went right for Jacksonville the rest of the way.

The Jaguars forced a punt, but rookie receiver Cecil Shorts failed to field the bouncing ball at the 10. It rolled dead at the 2. That put pressure on Turk to flip the field. He failed miserably, and since he’s been a problem all season, he probably will be released in a day or two.

He was booed loudly as he trudged off the field.

“You’ve got to make winning plays,” Lewis said. “If you make losing plays here and there, it’s going to add up at the end, and that’s what happened today.”

Notes: Bengals WR Jerome Simpson (shoulder) and LB Rey Maualuga (rib) left the game, but returned. … The Bengals finished with 239 yards, but were 8 of 19 on third down. … Cuban referee Alberto Riveron called a penalty in Spanish in the first half, part of the NFL’s recognition of Hispanic heritage month. … Jaguars CB Drew Coleman (concussion) and left tackle Eugene Monroe (shoulder) left the game and did not return.

The Associated Press MILWAUKEE — Even before the first pitch, the Milwaukee Brewers took a swing at the St. Louis... read more