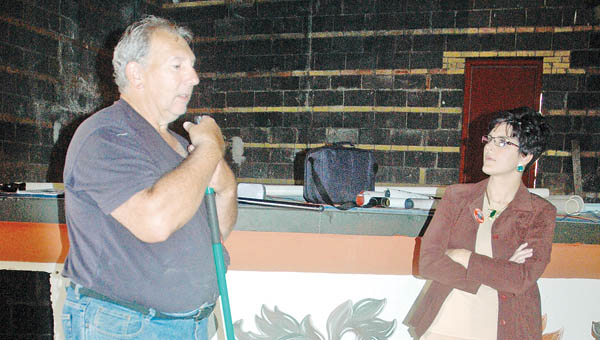 Dick Fisher, left and Katrina Keith, talk about plans for the Ro-Na Theater on South Third Street. The theater will have a film festival from noon-10 p.m. Sunday.

When the Ro-Na Theater on South Third Street ceased to be an entertainment venue, it was the late 1970s.

Since then, the building with the old fashioned marquee has sat empty, housed a car parts store and was slowly falling apart until area civic groups banded together to save it.

On Sunday, the Ro-Na will open its doors to a day-long series of entertainment that is meant to be a fundraiser and a fun time.

The Just For Fun’ds Film Festival will begin at noon with public domain children’s cartoons. It will be followed at 2 p.m. with a showing of the horror movie cult classic “Night Of The Living Dead.”

At 4 p.m. there will be some short films. And then the festival will feature two productions from local filmmaker Mickey Fisher, “The King of Iron Town” at 6 p.m. and “Summer Nuts” at 8 p.m.

Dick Fisher, who is helping organize the event, said all of the funds raised will go back into the restoration of the building. He said while there is no admission charge, there will be a donation bucket and from snacks for sale.

“This is to kind of kick start the renovation,” Fisher said. “We’ve got the roof on and now we’re going to start to use it for certain events.”

Katrina Keith, co-chair for the Ro-Na Restoration Committee, said she hopes this is the start of great things to come for an old building that is having new life breathed into it.

“We’re excited that Mr. Fisher is interested in holding such an event at the Ro-Na, she said.”  Our community is full of gifted individuals and the restoration of the Ro-Na will give artists a platform to showcase their talents.  The restoration of the building may be far from completion, but it doesn’t mean we have to stop dreaming.  Mr. Fisher’s desire to think outside the box and his ability to bring unconventional resources together proves that we can take nothing and turn it into something.  When positive, motivated people come together, the impossible becomes possible.”

Keith said she hopes in the future the Ro-Na becomes a multi-media outlet, able to accommodate movies, plays, dinner theaters, conferences and any number of other functions.

Those who come may want to bring a chair and, depending on the temperature, maybe a stadium blanket; the building does not yet have heating.

Fisher said the restoration committee has gotten assistance from Friends of Ironton, the city, the Ironton Port Authority and Spriggs Distributing. Ohio University Southern is donating the video equipment.

The Ironton City Council took possession of the old theater in 2008 with the intention of saving a part of the city’s history for future use.

Since then, the Ro-Na has gotten grants and other assistance for renovation, including, most recently, a $1.5 million tax credit from the Ohio Department of Development Historic Preservation.

With hours before the books closed on voter registration for the upcoming election, the county board of elections office Tuesday... read more