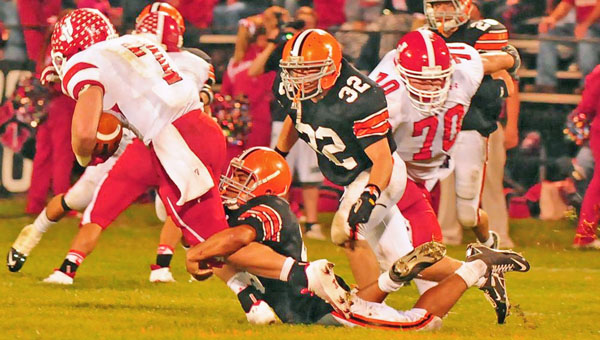 In their effort to defend that title, Hartley is 6-0, ranked second in the Associated Press poll, boasts a strong running game, a good defense and a running back named Ja’Waun Woodley.

“Not much has changed with them,” Ironton coach Bob Lutz said about the Hawks. “They have two good running backs, some good linemen and plenty of speed at the wingback and receiver positions.

“Defensively they’re solid and they have three really good linebackers. And they’ve got a good placekicker. They’re a good football team.”

Ironton (4-3) knows Hartley well. The two teams played twice last season. Ironton won at home 37-16 — Hartley had four turnovers — and then lost 26-20 in the regional finals of the playoffs when the Fighting Tigers had two turnovers.

Key ran for 2,000 yards as the exclusive back last season, but this year Woodley and Zang are sharing the carries. Woodley has 662 yards on 83 carries and seven touchdowns while Zang has 500 yards on 73 attempts and six TDs.

“Both their backs have good size and run hard. But the other backs have really good speed, so they can hurt you inside or out,” said Lutz.

Woodley, Zang and Bell lead the defense as the inside linebackers. The outside backers are Matuska and Nick King (5-11, 215).

Selegue is the nose guard, Kalil Morris (6-1, 220) the right tackle while Steele and Schaffer share the other tackle spot.

“They’re not that big up front, but they’re quick and active and they’ve got a good group of linebackers behind them to clean everything up,” said Lutz.

Brent Wahle is the kicker and has a strong, accurate leg.

Fickell: OSU’s goal is to get better