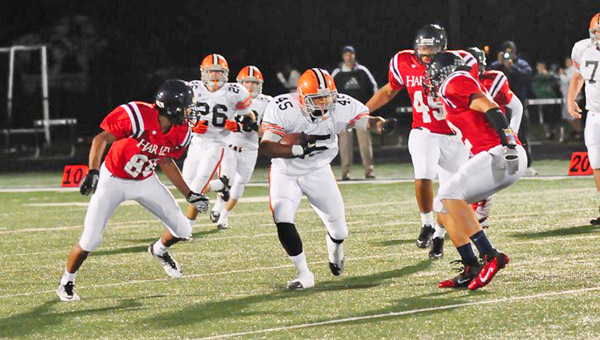 Ironton’s Trevor White (45) prepares to fight off a Hartley defender as he runs for yardage in the first quarter of Friday’s game. (The Ironton Tribune / TONY SHOTSKY of Southern Ohio Sports Photos)

Ironton didn’t have that much of a problem going up and down the field, but the Fighting Tigers had little success stopping Bishop Hartley’s offense. The Hawks racked up nearly 400 yards rushing in a 34-16 win on Friday.

Ironton had 243 total yards but the unbeaten and second-ranked Hawks got all but nine of their 397 yards on the ground.

“We didn’t have a problem moving the ball, but neither did they. We never could come up and make a play to stop them. We didn’t tackle well, but they have some big, strong backs that are hard to tackle,” said Ironton coach Bob Lutz.

Both teams moved the ball up and down the field in the first half. Hartley had 217 total yards with 208 on the ground and Ironton had 131 total yards — all rushing.

The Fighting Tigers punted on the first series of the game and the Hawks drove 85 yards in 12 plays with Calhoun running 24 yards for the touchdown. Brent Wahle booted the conversion at the 3:45 mark.

Ironton (4-4) came back and drove to the Hawks’ 17-yard line but came up less than a yard short on a fourth-and-2.

The Fighting Tigers came right back with an 80-yard, 7-play drive that culminated when Dion Brown bolted 35 yards for the touchdown. Trevor White ran for the conversion and Ironton trialed 10-8.

“Dion is getting better. He’s getting more comfortable in the offense and he’s not as tentative. You have to remember he’s missed the last two and a half seasons,” said Lutz.

Ironton avoided disaster just before the end of the half. Trying to run out the clock, White fumbled and Hartley recovered at the 20-yard line.

A penalty and two plays got the ball to the 1-yard line with 11 seconds left. The Hawks took their final timeout to decide what to do and elected to bypass the field goal and ran Calhoun who was stopped for no gain as time ran out.

Hartley took the second half kickoff and went 58 yards in seven plays as Woodley got loose for a 31-yard scoring run. Jared Brandewie threw to Jacob Matuska for the conversion and it was 25-8.

Ironton didn’t roll over. The Fighting Tigers used four plays to cover 52 yards as Tyler Kratzenberg hit Brown on a 36-yard touchdown pass less than two minutes later. White ran for the conversion and it was 25-16.

Alas, the defense was unable to slow the Hartley offense. This time the Hawks need nine plays to go 62 yards and Calhoun did the scoring honors from 14 yards out and it was 31-16 with 3:40 left in the quarter.

The Fighting Tigers got to the Hartley 40 on their next series, but a penalty pushed the ball back and two passing attempts ended up in sacks for a minus 11 yards and they were forced to punt.

Ironton forced the only Hawks’ punt on the next series but a drive to the Hartley 36 ended after a holding penalty and an interception.

Patrick Randall returned the interception for a touchdown but a penalty on the play brought the ball back to the 47 and 10 plays later Wahle sealed the win with a 20-yard field goal at the 1:26 mark.

Brown ran four times for 56 yards and had the 36-yard touchdown catch. White ran 12 times for 50 yards and Tyler Hager added 38 on 10 tries. Kratzenberg was 2 of 5 for 59 yards and two interceptions.