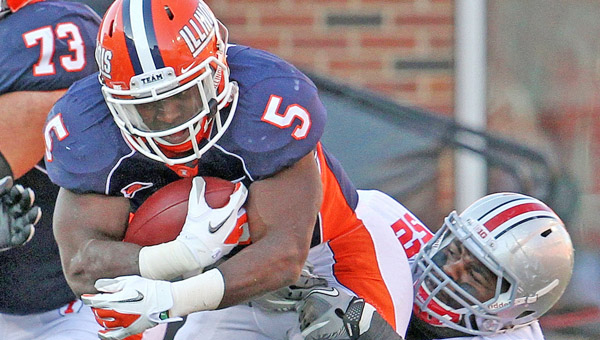 CHAMPAIGN, Ill. (AP) — A day after falling from the list of unbeaten teams, Illinois was left with a long list of questions.

Questions about key decisions, questions about turnovers, and others whether a team that had been averaging almost 450 yards a game can move the ball on a good defense. Illinois is 6-1 overall and 2-1 in the Big Ten, but it’s still unknown how good the Illini really are.

For Ohio State (4-3, 1-2) , the 17-7 road win answered the one big question raised after back-to-back losses — how can the Buckeyes turn things around?

Illinois coach Ron Zook quickly reminded his players that they must have done something right to win six games, and they still have big games ahead, including home dates in November against Wisconsin and Michigan. The loss dropped Illinois from No. 16 to 23 in The Associated Press Top 25 on Sunday.

“They’re hurt right now,” he said, “but we’re 6-1 and two of the better teams in the Big Ten still have to come here.”

But, starting Saturday at Purdue, Illinois will be challenged to find the running game that had averaged 226.2 yards a game before the Buckeyes held the Illini to 116.

Starting tailback Jason Ford left the game in the third quarter because of a sprained joint in his left shoulder after he ran for 33 yards. Quarterback Nathan Scheelhaase led the Illini with 49 yards on the ground, and no one else had more than 24.

“When we did a good job of stopping the run, I think it made them a little bit more one-dimensional,” interim Buckeyes coach Luke Fickell said.

Zook, a week after a questionable decision to go for two in a win over Indiana made fans and pundits scratch their heads, made two more moves that were open for debate.

Just into the second quarter, with the Illini trailing 3-0 and facing a fourth and 4 at the Buckeyes 32, Zook decided to punt. Illinois put the Buckeyes in a hole at their 4, but after a defensive stand, the Illini couldn’t move the ball.

On their next possession, the Buckeyes worked far enough up the field that Illinois’ territorial advantage was gone. The Illini wound up trailing 3-0 at halftime.

The second decision came with just over a minute left in the game. The Illini were down 17-7 but had the ball at the Buckeyes 17 with a fourth-and-3. Rather than try a 34-yard field goal by Derek Dimke, who is 7 for 7 this season with a long of 49 yards, and then go for an onside kick, Zook and his staff decided to go for the first down. Scheelhaase’s pass fell incomplete, and the game was over.

Zook said he and offensive coordinator Paul Petrino believed they had a play that would work.

“However you looked at it, we needed two scores and we felt like the best decision for us was at fourth-and-3 to get the first down and go from there,” Zook said.

The biggest play of the day was an interception by Bradley Roby that set up the deciding touchdown early in the third quarter.

Ohio State forced three turnovers Saturday and didn’t give up any.

That leaves the Illini near the bottom of the Big Ten in turnover differential with 12 forced and 14 lost. Only Minnesota — which has forced four turnovers and given up six — is worse.

“The one thing we’ve lacked a little bit on defense is making some plays,” Fickell said. “To have a play start right there and then answer with offense, that’s what this game is all about.”

While Ohio State turned to its defense, the big difference between the Buckeyes team that beat Illinois and the one that was 3-3 before Saturday was Daniel Herron.

The tailback returned from NCAA suspension to plow through Illinois’ defense for 122 yards and the winning touchdown. The lift he gave Ohio State went beyond the stat sheet.

As the Buckeyes defense stood in Illinois territory waiting for a TV timeout to end and the fourth quarter to start, Herron bobbed up and down among them, slapping helmets and revving up his teammates.

Some of Ohio State’s players talked before the game about not just finding something to turn their season around, but still having a shot to play for the Big Ten title.

A 1-2 start in the conference in most years would have doomed any team’s title chances, but in the new two-division setup, the Buckeyes haven’t lost to a divisional foe and still have four of them to play. Win out, and there’s still a chance the Buckeyes could play for the title in December in Indianapolis.

Ohio State is the only Big Ten team that lists the championship game as the last date on its schedule.

“Coming here to Illinois, we’re starting to be a very good team at Ohio State,” said tight end Jake Stoneburner, who caught Miller’s only completion Saturday for a touchdown. “And we have a lot of momentum going into Wisconsin.”