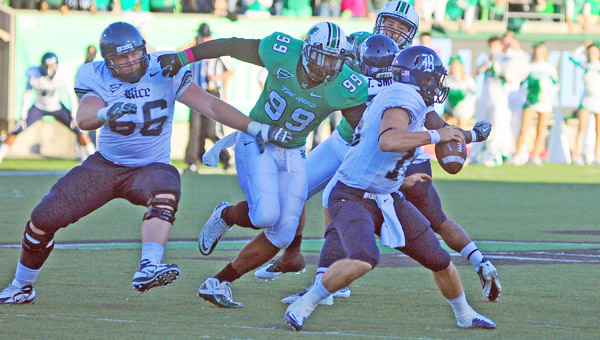 Curry is the third Marshall defender to win the award this season, following linebackers George Carpenter (Sept. 12) and Tyson Gale (Oct. 3), and it is the fifth time a Herd player has won a weekly honor (two Special Teams honors for punter Kase Whitehead).

The Neptune, N.J. native had another monster game Saturday, racking up nine tackles, which included four tackles for loss and 3.5 sacks, to go with a forced fumble and a fumble recovery.

All four of the sacks Curry had a hand in came on third down, effectively killing each drive in the process. Another one of his quarterback pressures resulted in a Rice fumble that Curry himself recovered at the Owls’ 25-yard line.

Finally, his strip of Rice RB Sam McGuffie set up the Herd offense at the Rice 23 with 3:31 left, with the Herd facing a 20-17 deficit. Marshall then scored the game-winning touchdown five plays later on a four-yard Tron Martinez scamper.

On the season, Curry leads the nation in tackles for loss with 17 and is second with 9.5 sacks. His contributions have also helped the Herd rank first nationally with 67 tackles for loss.

The game will also be televised on Comcast Sports Southeast (CSS) and will be carried locally on WSAZ-TV.

Winning only certain way to playoffs

By JIM WALKER Tribune Sports Editor In the words of the late Al Davis, “Just win, baby.” That’s what the... read more