Rangers rally in 9th to slip past Cardinals 2-1 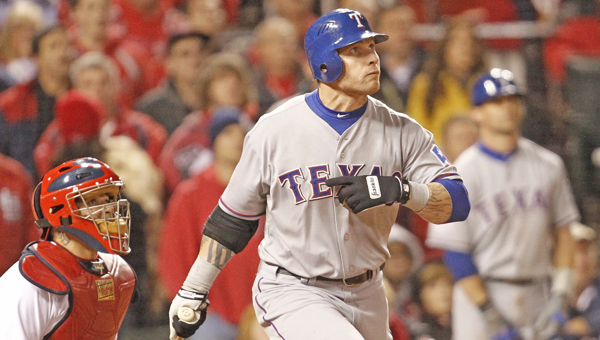 Texas Rangers' Josh Hamilton hits a sacrifice fly in front of St. Louis Cardinals catcher Yadier Molina in the ninth inning in Game 2 of the World Series at Busch Stadium on Thursday. The Rangers scored twice in the ninth inning to pull out a 2-1 win to tie the series at one game apiece. (The Ironton Tribune / MCT Direct Photos)

Until the ninth inning, that is.

Down to their last three outs, and in danger of dropping into a serious World Series deficit, the Rangers rallied against St. Louis’ vaunted bullpen.

Hamilton and Michael Young lifted sacrifice flies in the ninth and Texas startled the Cardinals 2-1 on Thursday night to even the Series at 1-all.

In a city excited by a Rally Squirrel, it was Groundhog Day — almost.

For the second straight night, Cardinals pinch-hitter Allen Craig greeted reliever Alexi Ogando with a go-ahead single. This time, Craig did it the seventh. In Game 1, his hit in the sixth sent the Cards to a 3-2 win.

The Rangers, however, were not done quite yet. Now, after a travel day, they will host Game 3 on Saturday night. Matt Harrison is set to start for the Rangers against Kyle Lohse.

“It would have been hard,” Hamilton said of possibly facing being 0-2. “We would have been comfortable going back to our place, having three games. They’re just like we are, never say die, til the last out is made. It makes it fun.”

Texas has not lost two straight games since Aug. 23-25. They sure waited a while to save themselves on this night that began as duel between starters Colby Lewis and the Cardinals’ Jaime Garcia.

Ian Kinsler opened the ninth with a bloop single against closer Jason Motte. Next up was Elvis Andrus, whose tremendous play at shortstop kept the game scoreless much earlier. He singled to center, sending Kinsler to third, and when the relay throw got away for a moment, Andrus scampered to second.

Cardinals manager Tony La Russa, who’s been making all the right moves this October, brought in lefty Arthur Rhodes to face Hamilton. But the slumping slugger, slowed throughout the postseason by a groin injury, hit a solid fly ball that scored Kinsler and moved Andrus to third.

La Russa went to his bullpen again, bringing in Lance Lynn to face Young. The steady Texas veteran did his job, lofting a fly ball that sent Andrus scampering home.

Then it was Rangers manager Ron Washington’s turn. He signaled for closer Neftali Feliz, who worked around a leadoff walk to earn the save. Mike Adams got the win.

The acrobatic Andrus made a sensational play in the fifth to keep the game scoreless.

After a two-out single by Nick Punto and a walk to the light-hitting Garcia, Rafael Furcal slapped a hard grounder up the middle. Andrus dived to his left to stop it on the edge of the outfield grass, got to his knees and flipped the ball with his glove about 25 feet to second baseman Kinsler, who barely beat Garcia to the bag for a forceout.

Their hardest hit early in the game came in the fourth — rather, it was the hardest a Texas player got hit.

Kinsler was at third base when Adrian Beltre sent a solid, one-hopper down the line. The foul ball nailed a ducking Kinsler in the right shoulder, and he grinned while playfully rubbing it off. No smiling, though, when Beltre took a poor cut at a low pitch and struck out to strand runners at the corners.

Garcia and Lewis dominated at the outset, and no one got a hit until Furcal doubled with two outs in the St. Louis third. Before that, the closest anyone came was Jon Jay, whose bunt danced along the third base line chalk before trickling foul.

Perhaps both sides could have used some hitting tips from Stan Musial. A month shy of his 91st birthday, Stan the Man was sitting in a Busch suite. The Cardinals Hall of Famer was shown on the video board and drew a big cheer.

NOTES: Garcia was the first Mexican-born starter in the World Series since Fernando Valenzuela in 1981. … The Cardinals hit into the most double plays in the majors this year, Texas was second. … Rangers president Nolan Ryan, before the game, on why he thought Texas would win in six games: “When I looked at St. Louis’ pitching, I don’t look at their pitching like a (Detroit ace Justin) Verlander, where you say boy, ’Verlander is on, we’re going to hope that something good has to happen.’ I’m not downplaying the Cardinals’ pitching by any means.”