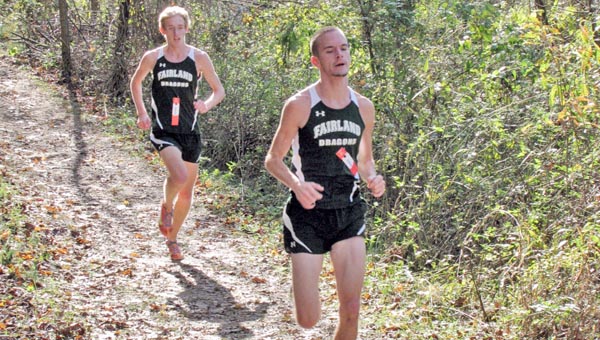 Winner Tanner Mattie (right) and runner-up Raine Wireman helped the Fairland Dragons claim the top five spots in the Division II district cross country meet and earn a trip to the regionals. (Courtesy of Bryan Walters of the Gallipolis Tribune)

RIO GRANDE — Nothing’s perfect, but the Fairland Dragons came as close as possible.

The Dragons claimed the first five places in the Division II District 1 cross country race on Saturday to post a perfect score in winning the district championship and gaining a berth in the regional meet at Pickerington.

“The goal was to win the district and have our top seven as all-district. We want to run good times to match that of the teams in the other race,” said Fairland coach Chuck Wentz.

Fairland had the minimum of 15 points to place ahead of runner-up Piketon that had 81 points. Lancaster Fairfield Union was third at 104 and Westfall had 128 points to place fourth.

The top four teams and any individuals in the top 16 not on a qualifying team advance to the regional meet.

Teams are permitted seven runners but only the top five scores are counted. Fairland’s other two runners still ran well as Josh Sifford was No. 11 with an 18:25.40 time and Dylan Hannon was 12th with an 18:26.60.

South Point Lady Pointers’ Sara Letchford advanced to the regional meet by placing 11th in the Division II District II race. Letchford ran a 20:56.04 time to qualify as one of the top 16 individuals.