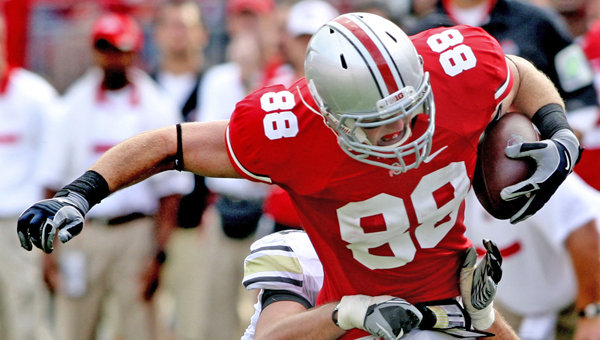 COLUMBUS — A funny thing happened to Ohio State during its bye week: The Buckeyes became a contender.

Wisconsin’s stunning last-second loss at Michigan State means that Ohio State, despite winning just one of its three Big Ten games, can still win its division. To do that the Buckeyes almost have to win out — starting with a showdown Saturday against the wounded 12th-ranked Badgers at Ohio Stadium.

“Ultimately it comes down to us taking care of our own business,” interim coach Luke Fickell said Tuesday. “Whether you need help, there’s always a light at the end of the tunnel.”

Penn State (4-0), Wisconsin (2-1) and Purdue (2-1) still lie ahead on the Buckeyes’ schedule. If they were to somehow win their final five games, the Buckeyes — beset by NCAA problems, suspensions and injuries — could still represent the Leaders Division in the inaugural Big Ten title game on Dec. 3.

They do need someone else to also beat No. 21 Penn State. But the Nittany Lions have a meat-grinder of a schedule that includes games at home against Illinois and Nebraska sandwiched around a bye week, and then closing on the road at Ohio State and Wisconsin.

Defensive tackle John Simon said the Buckeyes (4-3, 1-2) got a boost from knowing that they no longer are dependent on several others to play for what matters the most. Just a short time after being 0-2 and headed nowhere in the conference, now they have some hope.

“It gave a lot of guys motivation,” Simon said.

But all of the talk of contention doesn’t amount to a hill of horse-chestnuts if they don’t beat the Badgers.

“We have a lot of things to play for. We understand that,” Fickell said of his players’ reaction to Wisconsin’s stunning 37-31 loss to the Spartans on a desperation heave that a video review confirmed as a touchdown. “Maybe it’s another little something that our guys saw. Maybe they believe in themselves a little bit more. Maybe they see vulnerability. I don’t know what it is. Whatever it is, it still comes down to us taking care of what we need to take care of.”

There are subplots aplenty in the game, starting with how the Badgers (6-1, 2-1 Big Ten) respond to the defeat in East Lansing, Mich.

“I expect this group to bounce back, as they did late in the fourth quarter, and put everything in as preparation,” Wisconsin coach Bret Bielema said on Monday. “(This is) a great opportunity this week to go on the road, a night game, national stage against a traditional opponent that we all look forward to at Ohio State.”

The game time adds to the mix.

“It should be pretty crazy. I know our fans will get up for it with a power-ranked team, coming into Columbus,” Simon said. “We’re looking forward to the challenge. It’s going to be a fun night.”

One other undercurrent of the game is what happened the last time the teams met.

On Oct. 16, 2010, Ohio State was enjoying its ascension to No. 1 in the latest Associated Press rankings when it came to Madison, Wis.

The Badgers promptly rolled to a 21-0 halftime lead and then held off a second-half Buckeyes rally for a 31-18 victory. It would lead to the two teams tying for the Big Ten title with Michigan State. (That title and Ohio State’s 12-1 mark in 2010 were later vacated by the university as part of its self-imposed NCAA sanctions for playing players who had accepted improper benefits.)

Fickell stressed that last year’s game is a distant memory. But, by the same token, he didn’t tell his team to just forget it.

Wisconsin’s loss has also reinforced to the Badgers that they still control their own destiny and, if they win out, can assure their own trip to the first Big Ten title game.

“We explain to them that this week is a divisional game,” Bielema said. “Four of our next five are. Those are big ones.”

Like father, like son in the Sherman household. In 1972, a young coach by the name of John Sherman coached... read more