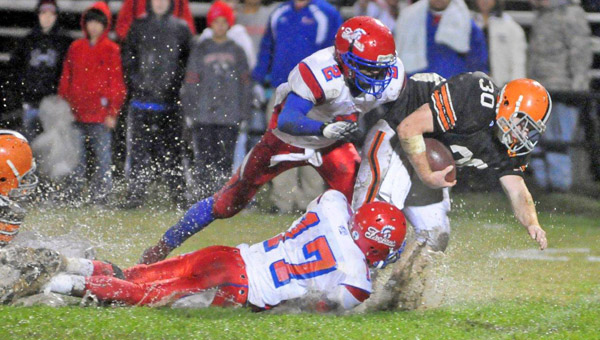 Ironton’s Tyler Hager (30) ran through the rain and Portsmouth defense for 197 yards in a 30-14 win. (The Ironton Tribune / Kent Sanborn of Southern Ohio Sports Photos)

If Friday’s game was a horse race, Tyler Hager would be considered a “mudder.”

Despite rain and a muddy field, Hager ran 21 times for 197 yards and a touchdown and the Ironton Fighting Tigers overcame four first half fumbles to beat the Portsmouth Trojans 30-14 at Tanks Memorial Stadium.

“That kind of weather is ideal for (Hager),” said Ironton coach Bob Lutz. “He’s low to the ground, he runs hard and he’s hard to tackle. And you had (Tanner) Schweickart blocking for him to make it tougher.”

Last year, Hager ran for 125 yards and five touchdowns on Portsmouth’s turf. So which game conditions does he prefer?

“I’d rather play a dry game,” said the 5-foot-7, 180-pound Hager who has excellent speed to go with his power running.

“We were all wet. It was hard to tackle me. If a guy tackles me, he has to wrap up. I just wore the defense out.”

Ironton (6-4) rolled up 378 yards on the ground and 390 total yards for the game. Trevor White had 89 yards on 18 carries and quarterback Tyler Kratzenberg had 73 yards on eight tries.

Quarterback Mason Jordan was 6 of 20 passing for 111 yards and two interceptions as Portsmouth (3-7) finished with 210 total yards.

Ironton had drives end at the Trojans 46- and 14-yard lines due to fumbles and they also muffed a punt on the final play of the quarter.

The first fumble led to the Trojans’ first touchdown, a 35-yard pass to Zaide Whitley who made the catch as he bounced away from a collision with two defenders on the play.

Ironton fumbled the ball away early in the second quarter, but Brandon Leach intercepted a pass at the 8:39 mark and Ironton went 57 yards in nine plays capped by White’s 2-yard run. He also added the conversion to put Ironton up 8-6 with 4:10 left in the half.

“We’ve played two (other) mud games this year. I think Jonathan Alder was a lot worse than out there and we didn’t fumble it too much,” said Lutz. “Every back we had fumbled the ball. We couldn’t catch a punt, we fumbled around with kickoff returns, but we made a couple of plays there at the end on defense.”

The Fighting Tigers marched 67 yards in eight plays to start the second half to score at the 8:19 mark. Hager had a 25-yard run in the drive and his block sprung White on a 16-yard scoring run. Kratzenberg ran for the conversion and it was 16-6.

“It took a little getting used to. Everyone took their gloves off in the second half,” said Hager.

Jordan hit L.J. Adams with a 23-yard touchdown pass on fourth down and Wayne Evans caught the conversion pass as Portsmouth got within 16-14, but Hager answered with a 57-yard touchdown run three plays later and the lead was 22-14.

Ironton got the ball at its own 17 early in the fourth quarter and reached the Trojans’ 44 where Kratzenberg ran a yard for a first down on a fourth down. He then kept the ball and went the remaining distance to score his first-career rushing touchdown with 6:04 to play. White’s conversion run made it 30-14.

Portsmouth failed to convert on fourth down and Ironton ran out the clock as the game ended with the Fighting Tigers at the Trojans’ 8-yard line.

Ironton is expected to play at Amanda-Clearcreek next Saturday in the Division IV playoffs.