Defense will be key for Ironton against Johnnies 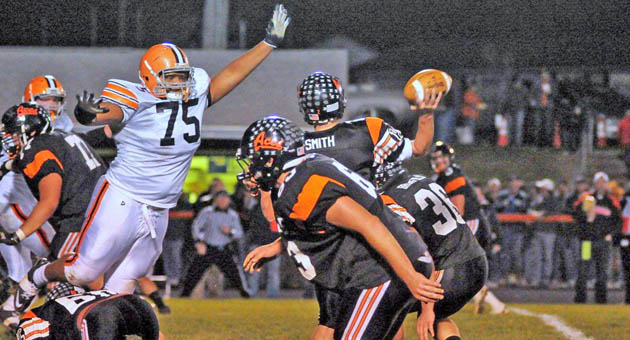 “We fumbled kickoffs and put ourselves deep in a hole, and we fumbled the ball and gave them great field position. But our defense bailed us out all night,” said Ironton coach Bob Lutz.

“They didn’t move the ball on us but once or twice. They got two field goals off fumbles. If we hang onto the ball and get field positions, it would have been a lot easier for us.”

Ironton’s defense is expected to get an even bigger test this week against Region 15’s only unbeaten team Johnstown-Monroe. The teams meet at 7 p.m. Saturday at Hamilton Township High School.

Not only are the Johnnies 11-0, they have scored at least 34 points in every game this season.

The offense features 6-foot, 203-pound senior running back Ross Franklin who has 2,577 yards rushing on 241 carries for a 10.69 yards per carry average. He has scored an amazing 40 touchdowns.

Another key weapon in the offense is 6-3, 190-pound senior quarterback Matt Smith who has put up big numbers running and throwing. Smith is 29 of 56 passing for 644 yards and five touchdowns while running 130 times for 1,199 yards and 17 touchdowns.

Last week Johnstown beat Indian Valley 42-21 in the first round of the playoffs with Franklin running for 149 yards and two touchdowns. Smith led the Johnnies with 184 yards and four scores.

Ironton (7-4) lost three fumbles with two setting up short field goals for Clearcreek. But it was outstanding defense that helped limit the Aces to field goals and kept them out of the end zone.

Linebackers Brandon Leach and Cody Roberts each had nine tackles and Roberts was in on a quarterback sack.

Defensive ends Aaron Stephens and Skylar Fields were both part of two sacks and Stephens, Roberts and Michael Lawless combined to stop a fourth down play that ended the Aces’ final hopes of tying or winning the game.

Lawless had two pass breakups including a near interception on a third down to stop a Clearcreek drive that was nearing midfield.

“Coach Lutz told us (after the game) he was proud of the way we stepped up and made plays on defense,” said Fields.

Safety Tyler Kratzenberg had seven tackles and a pass breakup while cornerback Tanner Dutey came up with an interception. Cornerback Tyler Hager had five tackles and safety Jake Rawlins broke up two passes, one in the end zone.

The defensive line was stellar, especially in the second half. Tommy Saul had five tackles, Laron Beach two, Dakota Taylor five and Nick Culbertson two stops and a pass batted down before leaving with an injury. Jon Shotsky helped combine on a stop in a goal line stand that held the Aces to a field goal.

CINCINNATI (AP) — Defensive lineman Domata Peko didn’t realize the Cincinnati Bengals were at the top of the AFC until... read more