BURLINGTON — It has been 40 years since Dr. Douglas Carter accepted the call to pastor First Baptist Church of Burlington. Beginning today and continuing through Sunday, Carter’s parishioners will honor their pastor’s 40 years of service with a series of special events.

“He is a very, very wise man, very knowledgeable and he still inspires us at almost 83 (years of age),” Murray-Medcalf said. “He still teaches, does revivals, he has a strong ministry .He is known for being the voice of wisdom. We like to say he is called, anointed and appointed.” 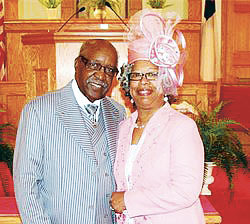 Dr. Douglas Carter stands with his wife, Barbara, at First Baptist Church of Burlington. Carter is celebrating 40 years of serving that church as pastor.

The church will honor Carter’s wife, Barbara, with a First Lady’s luncheon at noon Saturday. Fellow minister’s wives, friends and family will come together to honor Mrs. Carter through prayer, song and words of inspiration and encouragement.

Then at 11 a.m. Sunday, the Rev. John Morgan, pastor of Crown Of Life Church, Dallas, Ga., will deliver the message. Tracy Carter Morgan and Renee Carter will provide special music.

Dr. Carter was raised in Ironton and graduated from Ironton High School in 1948. During his high school years he played football. He also played semi-professional football for the Ironton Bengals from 1948 to 1950.

Carter served in the U.S. Air Force until 1955. He also retired from Armco Steel in Ashland, Ky. Carter is married to Barbara M. Carter and together they have 11 children, a host of grandchildren and great-grandchildren.

Carter acknowledged his call into the ministry in 1970 under the pastorate of the Rev. Henry Fletcher at the Mount Olive Baptist Church in Ironton, where he was ordained. In 1971, he was called to pastor the First Baptist Burlington, where he has been ever since.

“In this day and age you don’t see someone stay in one place 40 years without a break,” Murray-Medcalf said. “He is truly God sent.”

CG teen sentenced for robbery One of three men involved in a home invasion in Chesapeake will spend the next... read more