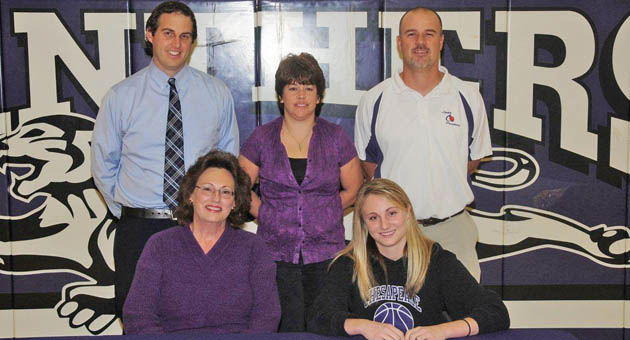 CHESAPEAKE — Amanda Ruffner became the latest young girl to fall in love with someone much older.

But in this love affair, the target of the Chesapeake Lady Panthers’ basketball standout affection was her future destination.

Ruffner signed a letter-of-intent to play at Fairmont State University on Thursday, thus completing an athletic marriage made in heaven.

“I went there last August for a tour of the campus and fell in love with what I saw,” said Ruffner. “I met with the coaches and I knew that was where I wanted to be.”

Chesapeake Lady Panthers’ coach Chris Ball said the union between his star player and the successful Lady Falcons’ program should be a good fit for both parties.

“They’re one of the elite programs of their conference. For them to win 20 games isn’t out of the norm for them,” said Ball.

“Amanda brings a little of everything and a whole lot more. She has a great work ethic. If she wants to be stronger, she lifts weights. If she wants to shoot better, she stays after practice and shoots. She’ll fit into their program well.”

Last season Ruffner averaged 17.9 points, 11 rebounds and four blocked shots. She is expected to reach the 1,000-point plateau as she begins the season with an 888 total.

“She’s one of the better players and athletes in the area,” said Ball who noted Ruffner also excels in volleyball and track.

Fairmont State has had nine straight winning seasons under coach Steve McDonald and the Lady Falcons have achieved 20-win seasons six times during that span.

‘It’s a great program. I wanted to go somewhere that had a good program and a history of winning,” said Ruffner. “Everyone wants to win a championship. I just hope I can contribute to it.”

While Ruffner plays center for Chesapeake, she expected to play a small forward or guard position at the college level.

“Coach McDonald told me he was they type of coach who correlates his offense around the players he has,” said Ruffner. “I’ll probably play guard. It’ll be a change and a challenge, but I have confidence that I can make the adjustment.”

Ball has no doubt Ruffner can make the adjustment.

“She had a dream to achieve a scholarship and now she has realized it through hard work. Whatever they need her to do, she’ll do it because she’s a very determined individual. It just proves that hard work brings success,” said Ball.

Ruffner was humbled by the scholarship offer. She expressed thanks to her high school coaches and her AAU Southern Ohio Magic coaches Kenny Justice and David Curry for their help during the summer months.

“It’s definitely a big stress reliever for me to have signed now. I’m very excited,” said Ruffner. “I want to thank coach Mac (McDonald) for giving me the opportunity to play. I do greatly appreciate it and I really appreciate all the help I’ve gotten from all my coaches. I don’t think words can fully express my gratitude.”

The Associated Press   COLUMBUS — The NCAA accused Ohio State for the first time of a “failure to monitor”... read more