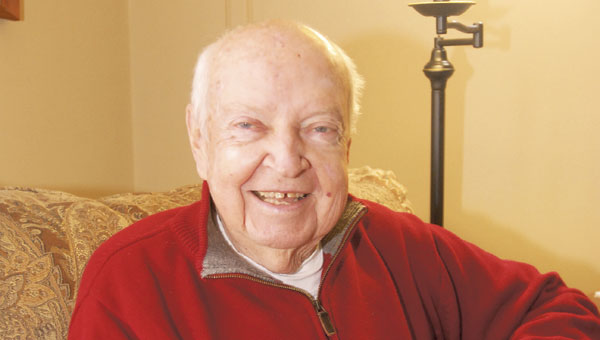 They poured out of the sky like tens of thousands of black raindrops. Those paratroopers who made up the first wave of Allied forces hitting the cold, dark beaches of Normandy, France instinctively committing acts of soundless heroism that gave the world hope that the Nazi forces would not overpower.

One of those jumpers was a young 20-year-old from Ironton, whose days just three years earlier were filled only with classes at St. Joseph High and ball games during the week and Mass at St. Lawrence on Sundays. 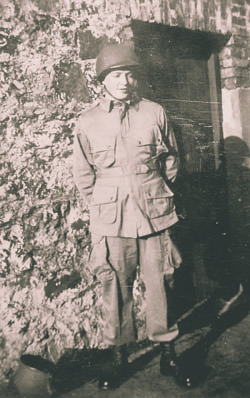 A photograph of Rudmann in 1943 when he was in Northern Ireland serving in the Army.

A year before the invasion Lawrence Rudmann had signed up with the Army, shipping down to Fort Benning, Ga., for basic training. Along the way, he decided to volunteer with the 82nd Airborne Division and train at parachute school.

That switch put $50 more in his paycheck a month, money that he thought would come in handy for a married man with a young wife and baby girl.

“That fall they sent me to Ireland,” Rudmann said. “It was three months there and then three months in England. We were preparing for the invasion of D-Day.”

Rudmann knew the Allies were gearing up to invade Europe, but how massive the operation he had no idea.

“I was somewhat scared,” he said. “I landed in a tree and had to wiggle myself down. I had my bayonet with me and cut my lines off me.”

Down on the ground he met up with his buddy, George Hickey from New York, and joined the march through France. Their first stop was the tiny village of Sainte-Mere-Eglise in northwestern France located on a main route the Nazis would take to battle back the Allies as they took over the Normandy beaches.

Liberating the village, the troops were met with jubiliant French citizens who popped opened up kegs of cider to share with them. Then for the next four days the Allies and Germans exchanged fire.

“In the middle of the night we got captured,” Rudmann said.

His buddy was mortally wounded and Rudmann was taken prisoner.

“It wasn’t good,” he said. “There were nine of us. They marched us half way across Europe.”

When they got to Paris, the prisoners were packed into boxcars for part of the way.

“But mostly we walked,” he said.

From June to September, they marched, always at night to hide from the strafing by American aircraft.

The first POW camp Rudmann saw was Stalag 7A at Moosburg, Germany.

“There was barbed wire, dogs and hardly any food,” Rudmann said. “We slept on the ground. I thought I would never get home.”

Days were a jumble of sick-to-your stomach fear and mind-numbing boredom.

And always Rudmann’s thoughts were on his wife, Margie, and their 2-year-old daughter, Rita.

In December the POWs were taken by rail to a village near Munich, where the picture postcard landscape belied the ordeal of slave labor at a farm facing the men. There they worked sun up to sun down, finding rest in a cold dank stable at night.

“Sometimes the snows were two feet deep,” he said. “My shoes wore out and they gave me a pair of wooden shoes to wear. Some days you didn’t have anything to eat. Some days they gave you potatoes.”

Rudmann stayed there through winter until spring when finally that day he thought would never come did arrive. The defeat of the Nazis had come. It was liberation, freedom and home.

Now as the oldest living POW survivor in the county, Rudmann, 88, will only talk about that time with reluctance. But as the nation celebrates the 93rd Armistice or Veterans Day, Rudmann wants the sacrifices of the military never to be forgotten.

“We certainly ought to remember and be thankful they did what they did,” he said. “I am certainly thankful I got back.”