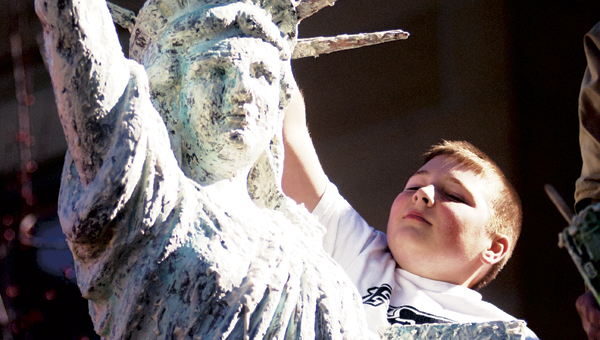 Lady Liberty went to the spa on Saturday, getting slathered with a specially formulated beauty cream that was part flour, vinegar and bleach.

The goal was to make the statue on the lawn of the county courthouse as shiny as new.

While the goop was on her, she looked a bit washed out and peaked. But the end results were worth it as Boy Scout Troop 106 gave up part of its weekend to beautify a symbol of freedom for this country.

“We are treating the copper metal with a solvent to take the oxidation out of it,” Randy Franz, assistant scoutmaster, said.

Next came cleaning the concrete base that also was streaked with oxidation. Earlier the broken points in the statue’s crown were soldered back.

“Some were broken off,” Franz said. “I don’t know if kids did it or it was ice.”

Sixty years ago one Memorial Day in Lawrence County, another Boy Scout troop gave the 8 foot-high replica of the Statue of Liberty to the county. That was part of a nationwide program of the scouts as they celebrated their 40th birthday.

There were about 200 of the replicas, made of stamped copper, donated to 39 states. Four were erected in Ohio, with only the statue at Youngstown no longer in existence.

On hand Saturday for the cleaning was Travis Cadet, senior patrol leader.

“This is good for the community and the veterans,” he said.

With him was Thomas Williams, assistant senior patrol leader.

“This is a good thing because it shows what we actually do,” he said.

Next Saturday at 2 p.m. will be the official unveiling of the renovated statue in a ceremony on the courthouse lawn. Playing the bugle then will be Andrew McCown, who also participated in the cleanup.

“This project is really good,” he said. “It helps build character.”

HUNTINGTON, W.Va. — Today, Marshall University will pay tribute to those that died in what is has been called... read more