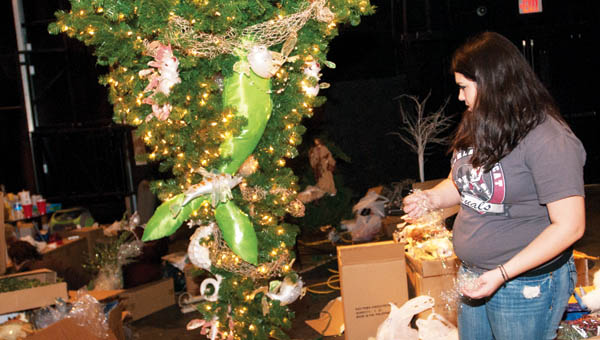 Abbagail McCormick carefully decorates her mermaid tree for the Paramount’s Festival of Trees and Trains in Ashland, Ky.

ASHLAND, Ky. — Storybook magic is in the air at the Paramount Arts Center, where preparations are underway for this weekend’s opening of the 27st Annual Festival of Trees and Trains.

Volunteers were busy Tuesday, trimming close to 100 trees and working on the five levels of the garden-scale railroad displays that will twinkle and whistle inside the beloved theater during the festival’s 10-day run.

This year’s theme is a Storybook Christmas and will be reflected in the designs of the trees,being created by community groups, school children, businesses and individuals, said Rhonda Ballengee, festival chairman.

A special premiere party – that will feature costumed storybook characters – is slated for Friday night. Tickets are $100 and are still available. Visit the PAC’s website at paramountartscenter.org for more information. Tickets include buffet dinner and drinks. The large Christmas trees are typically auctioned off that evening.

The festival will officially open to the general public on Saturday morning at 9 a.m. Opening day festivities include a special production of “Winnie the Pooh A Christmas Tail,” performed by the Paramount Players beginning at 10 a.m.

Visitors can also have cocoa with Santa on Saturday as well as visit him on stage workshop.

Live entertainment is planned each day with local high schools, churches, dance groups, and other local musical acts and clubs scheduled to perform.

A special Family Day, with $10 admission for the entire family, is planned for next Tuesday. The event coincides with Ashland’s Christmas Parade, the second longest parade in Kentucky, to be held beginning at 7 p.m. in downtown Ashland as part of the Winter Wonderland of Lights festivities.

Children will be invited on stage at the Paramount the following day to play with trains and participate in a special arts and crafts event.

Visitors to the festival throughout the week will be asked to vote on their favorite trees with award winners and raffle drawings to be announced at festival closing on Nov. 27.

Proceeds of the event, sponsored by the Paramount Woman’s Club, benefit children’s education programing. The festival typically raises in excess of $100,000.

Four months after massive rains devastated roads and bridges in the county, repair work is almost one-fifth completed and the... read more