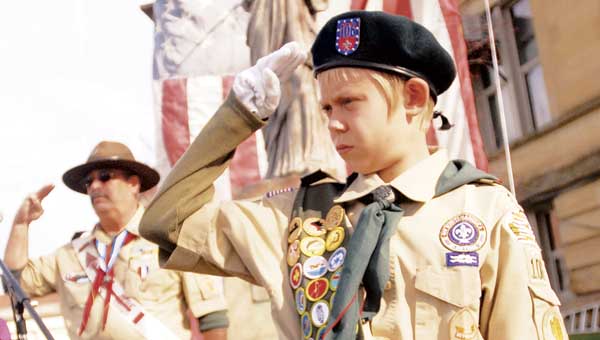 Boy Scout Troop 106 and Cub Scout Pack 106, of Central Christian Church, unveiled the scrubbed and refurbished Statue of Liberty on the Lawrence County Courthouse lawn in a ceremony Saturday afternoon.

A few weeks ago, the troops, under Scoutmaster Dave Lucas, began restoring the statue as a scout-troop-and-pack-wide community service project. Points on the statue’s crown were resoldered.

A mixture of flour, vinegar and bleach was used to clean the statue and then a solvent was used to take the oxidation out of the copper.

The base of the eight-foot statue was also cleaned. The troops kept the statue swathed in plastic until her moment of unveiling. The rededication allowed the public a chance to see a lovelier Lady Liberty but also get a glimpse of scouting in action.

“It’s good to see the troop trying to make a difference for the beautification of our county and our community,” Lawrence County Commission President Les Boggs said in his address to the crowd. He praised the spirit of volunteerism that makes projects such as this one possible.

Ohio University Southern Professor of History Robert Leith told the assembly he can remember when the statue was first placed at the courthouse.

“I was eight years old,” he said. Back then children in local schools marched in the Ironton Lawrence County Memorial Day Parade with flowers in one hand and a flag in the other.

He applauded the scouts for having undertaken the project.

“We don’t have a lot of scout troops in Ironton now. But although they may be few, I see the things they do. They clean the parade route, have canned food drives and this project,” Leith said.

In 1951 the Boy Scouts of America placed a small-scale version of the State of Liberty on the Lawrence County Courthouse lawn, one of some 200 such statues placed throughout the country.

Eyeing the success of the scout project, Lucas told the assembly, “She’s ready now for another 60 years.”

SUNBURY — One of Lawrence County’s fallen soldiers was honored once again, this time with a marker at the Ohio... read more