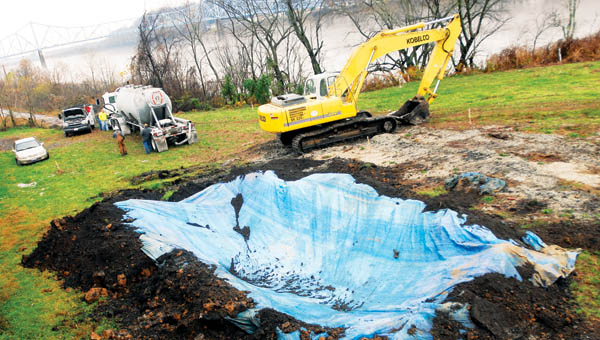 Employees from Mark Allard Excavation work on remediation on a section of riverfront property in downtown Ironton.

“This is exciting,” Charlotte Rowley said as she peered through an opening in the floodwall Tuesday at the heavy equipment lining up along the Ironton riverfront.

Rowley, of Pomeroy, said her hometown has a riverfront park and she is thrilled Ironton will some day have one, too.

While the riverfront between the Center Street landing and Stormes Creek is a brushy stretch of land right now, the heavy equipment is a sign of things to come.

Tuesday, city officials gathered at the city center to cut the ribbon on a remediation project that will turn a portion of the land that is contaminated now into useable ground. That is one of the first necessary steps in the process of putting a new riverfront park there.

“This has been a long, hard job,” Mayor Rich Blankenship said. “This is the first phase of a process. There is a lot more (work) to get to where we want to be but we’ve got to start somewhere.”

The Ohio Department of Development is providing the funding — $1.5 million for the remediation. Mark Allard Excavation of South Webster has been hired to remove five feet of contaminated soil from two parcels of land and replace it with five feet of uncontaminated soil.

This will clear the way for the area to be used for various forms of recreation, such as hiking and biking trails, picnic areas, and restrooms. The city has already gotten a $100,000 Natureworks grant to pay for the trails. Blankenship has said he is hopeful the city can get more grants to pay for other attractions.

The riverfront development has been on the drawing board for more than three years. In October 2007 the Ironton Port Authority purchased four acres of land that sat in the middle of 10 acres the city already owned.

The $150,000 for the land acquisition was a line item in the state budget obtained by former mayor John Elam. Since then the IPA and city have had the required environmental assessments and other studies conducted.