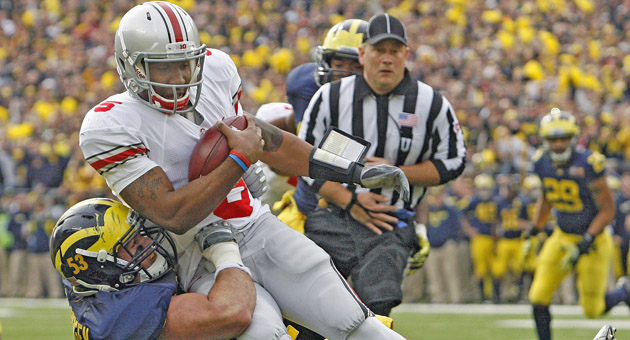 ANN ARBOR, Mich. — Denard Robinson danced with his feet and dazzled with his arm, giving Michigan an edge at quarterback against Ohio State.

Robinson accounted for five touchdowns, helping the 17th-ranked Wolverines beat the Buckeyes 40-34 on Saturday and snap a record seven-game losing streak against their archrival. He ran left, right and center, using his speed to blow past Buckeyes, juke moves to slip tackles and sacks and even showed some power when an extra yard was needed.

The star quarterback had a chance to leave college football’s winningest program when the spread coach he came to play for — Rich Rodriguez — was fired in January. This victory made it all worthwhile.

“I wouldn’t want to be anywhere else except with these guys,” Robinson said. “I’m glad I stayed.”

And, coach Brady Hoke is happy he was given a chance to come back to Ann Arbor, where he was an assistant.

“I got the best job in the world,” Hoke said.

Former Ohio State coach Jim Tressel used to think the same thing, especially when he made the Wolverines a target and beat them regularly when they were led by Lloyd Carr and Rodriguez.

Tressel was forced to resign nearly six months ago in the wake of a cash-for-Buckeyes memorabilia scandal that also led to quarterback Terrelle Pryor bolting for the NFL and several other players serving multiple-game suspensions in what became the program’s worst season on the field since 1999.

The Buckeyes are led by interim coach Luke Fickell — for now — but Tressel addressed his former players Friday before they boarded busses in Columbus, Ohio.

“To be able to see him again, I think it definitely got us pumped up,” Ohio State center Mike Brewster said.

The Buckeyes got off to a great start, scoring first on Braxton Miller’s 54-yard pass to Corey Brown and holding Robinson to a three-and-out drive.

Ohio State led twice more in the first half and had a 24-23 advantage at the break. After the Wolverines went ahead 30-24 on Robinson’s 20-yard pass to Martavious Odoms to open the second half, Ohio State pulled within three points early in the fourth and again midway through the fourth quarter.

Michigan (10-2, 6-2 Big Ten) was forced to settle for a six-point lead with 1:59 left on Brendan Gibbons’ career-long 43-yard field goal after two apparent TDs were negated by a video review and then penalties.

“I thought we had a chance,” Miller said.

But Miller sailed a pass over Deviser Posey’s head on what could’ve been a 76-yard TD, spiked the ball to stop the clock on third down with 45 seconds left — because he said the coaches told him to — then threw a loss-sealing interception to Courtney Avery.

Michigan isn’t used to beating the Buckeyes, igniting one of the most raucous celebrations anyone can remember in Ann Arbor, at least for seven years.

Robinson got the final snap cleanly, took a quick knee and set off a long, loud, maize-and-blue celebration.

Michigan Stadium’s field was flooded with fans after the home team ended a drought that lasted more than 2,900 days — a fact the players were reminded of each day by signs Hoke posted in Schembechler Hall soon after he was hired 10 months ago.

The public-address announcer tried in vain to get the field cleared for the bands, but they stayed in a cluster around the block ‘M’ at midfield and were sprinkled throughout the rest of the field as they soaked up a long-awaited moment. About 20 minutes later, Michigan’s band finally was able to take the field.

“This game is more than a win,” defensive end Ryan Van Bergen said. “It’s bigger than that. It encompasses way more.”

Robinson also showed he can do more than run.

He was 14 of 17 — completing 11 straight passes during one stretch — for 167 yards with TD passes to Junior Hemingway, Odoms and Kevin Koger. Robinson ran 26 times for 170 yards and two more scores and lost a fumble.

Miller was pretty good, too, especially for a freshman.

The Wolverines also had more success creating holes for their featured running back.

Fitzgerald Toussaint had 120 yards rushing, but didn’t score because video review overturned his apparent TD late in the game. He was ruled down before getting in the end zone. Robinson then had a TD run negated by a holding penalty — and yet another flag after the play pushed Michigan back to the Ohio State 26, forcing Gibbons to make the longest field goal of his career to force the Buckeyes to score a TD to win.

A miss there would have given Ohio State good field position with a great chance to at least tie the game and force overtime.

“There wasn’t a doubt in my mind,” Hoke insisted.

Ohio State’s Dan Herron was held to 37 yards rushing and a TD on 15 carries, but the Wolverines had trouble slowing down Miller just as they had previously with Troy Smith, who started Ohio State’s winning streak in 2004, and Pryor who extended it with last year’s win.

The Buckeyes have already said they won’t pass up the chance to go to a bowl game — if the NCAA allows them to play in the postseason.

Regardless, Urban Meyer — who led Florida to two national titles — is widely expected to take over the program.

Former Ohio State running back and 1995 Heisman Trophy winner Eddie George said the fact that Meyer wasn’t in Ann Arbor with his ESPN crew was another obvious sign that he’s the next coach of the Buckeyes.

“I think it’s pretty much set in stone,” George told The Associated Press on Saturday morning at Michigan Stadium, where he was working as an analyst. “There are rumors already about what he’s signing for and who’s coaching with him. After this game, the chatter is obviously going to get even louder and I think we’ll know something definitely by Monday.”

Fickell tried his best to avoid questions about his future and pounded a table after one such query.

“Like I said, it’s about the Ohio State-Michigan game,” Fickell said. “It’s been about that since last Sunday. It’s going to be about that always.”

Hoke knows that as well as anyone.

He set the tone for a new era in the rivalry by pounding his fist on a lectern when asked about the school he grew up rooting against in Dayton, Ohio, back in January and demanding his players respond, “Ohio,” when he said “Beat,” every time they met since then.

Michigan might even make it into a BCS bowl game for the first time since 2006. Hoke took many of Rodriguez’s players and helped them perform much better — especially on defense — this season and figured out a way to use Robinson’s skills.

Hoke’s focus on the rivalry rubbed off on his players, including his star QB.

“You could tell that this game mattered big time to Denard,” Van Bergen said.

Herd wins to qualify for bowl